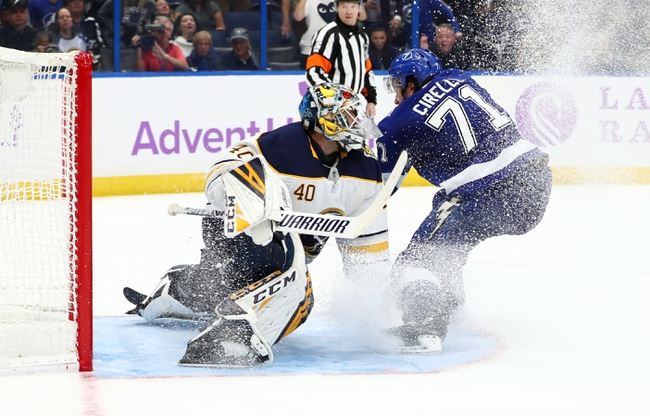 The Tampa Bay Lightning and the Buffalo Sabres meet in NHL action from the KeyBank Center on Tuesday night.

The Tampa Bay Lightning will look to build on their current three-game winning streak after a 2-1 win over Detroit in their last outing. The game was scoreless through the opening 20 minutes before Ondrej Palat opened the scoring for the Bolts 4:10 into the 2nd period. Detroit would tie the game up at one with just over two minutes to go in the middle frame, but Brayden point would restore Tampa Bay’s lead on the power play just 5:33 into the 3rd period. The Lightning stifled the Red Wings the rest of the way, slamming the door shut as Detroit couldn’t find a game-tying goal down the stretch. Curtis McElhinney got the win to improve to 4-4-2 on the year after stopping 19 of 20 shots faced in the winning effort.

The Buffalo Sabres will be out to snap a three-game losing streak after a 3-2 loss to the Boston Bruins last time out. Boston opened the scoring with the lone goal of the opening period before Rasmus Ristolainen tied the game at one for the Sabres with the only goal of the 2nd period. Boston broke ahead 3-1 early in the 3rdwith a pair of power play goals :18 apart, but Curtis Lazar would pull one back for the Sabres just 2:13 later. Despite their best efforts, outshooting the B’s 26-22, Buffalo wouldn’t find a game-tying goal the rest of the game as Boston picked up the win and the two points. Linus Ullmark took the loss, falling to 11-10-3 on the year after allowing all 3 goals on 22 shots faced in the losing effort.

The plus money with Buffalo given their home record is tempting on the surface, but the problem is that the Sabres are still struggling right now while the Bolts have owned the rest of the Atlantic division dating back to last year and Buffalo is no different. I just think that Tampa Bay gets the win here so I’ll side with the Lightning in regulation to get a more favorable price.