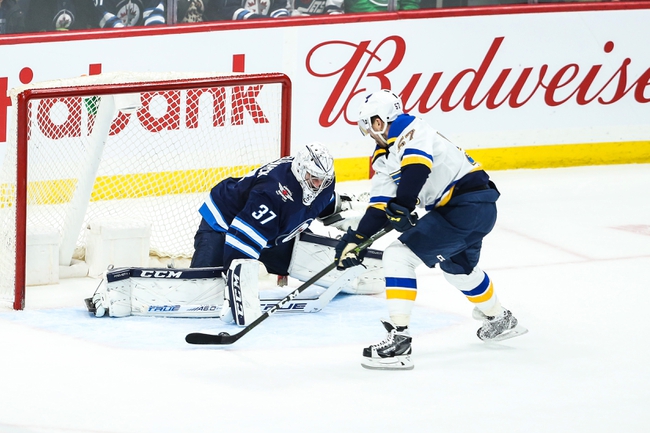 The Winnipeg Jets and the St. Louis Blues meet in a Central division matchup in NHL action from the Enterprise Center on Sunday afternoon.

The Winnipeg Jets will be looking to end St. Louis’ winning streak which for the Blues currently sits at seven games after a 5-4 overtime win over the Jets last time out.

Justin Faulk opened the scoring for St. Louis just 1:10 into the game before Gabriel Bourque tied the game up at one for the Jets in the final minute of the opening period. Alex Pietrangelo gave St. Louis the lead five and a half minutes into the 2nd period before Kyle Connor tied the game for the Jets just before the midway point of the 2nd and Tyler Bozak restored the Blues’ lead with just under four minutes to go in the middle period.

Connor tied the game at three for the ‘Peg 3:12 into the 3rd and Bozak would again restore the Blues’ lead just 1:58 later. The Blues almost held on for the win but Blake Wheeler would tie the game with 1:14 to play, sending us to overtime where David Perron found the back of the net with less than two minutes to play in extra time, giving the Blues the win and the extra point that goes with it.

Jordan Binnington got the win in goal for the Blues after stopping 25 of 29 shots faced to improve to 18-6-4 on the year while Connor Hellebuyck got the OT loss for Winnipeg, falling to 17-10-3 after giving up all 5 goals on 35 shots faced.

I’ve gone back and forth on this game, and I totally agree with the Blues being favored at home, but I just feel like the Blues are due for a trip-up game, and I think this is that spot. Winnipeg has had a lot of success in St. Louis lately, winning 5 of the last 6 at the Enterprise Center and the Jets have been a really good team on the road all things considered. The Jets slipped up at home but they battled the Blues hard in that game and I think the Jets get some revenge here so I’ll take a stab at Winnipeg with the plus money on Sunday.