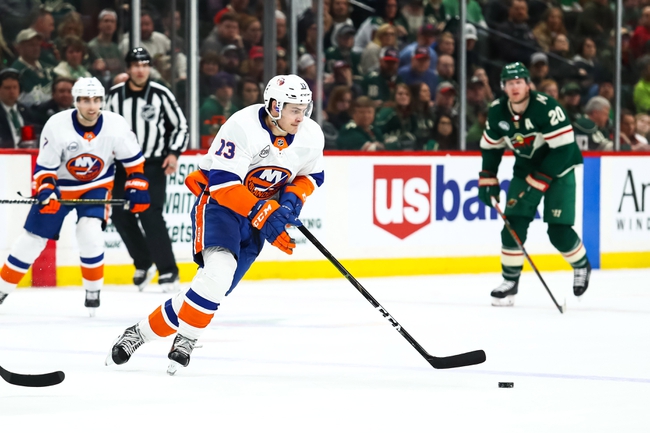 The New York Islanders and the Minnesota Wild meet in NHL action from the Xcel Energy Center on Sunday night.

The New York Islanders will be out to snap a three-game losing streak after a 5-2 loss to Chicago last time out. Ross Johnston opened the scoring for the Isles less than six minutes into the game before Chicago tied the game just 1:44 later. 2:12 after that the Blackhawks took a 2-1 lead and made it 3-1 2:10 later. The 3-1 score would hold up through the rest of the 1st and all of the 2nd before the Blackhawks struck twice in a span of 2:13 to go ahead 5-1. Casey Cizikas scored a consolation goal late in the 3rd but ultimately it was too little too late as the Blackhawks held on for the win. Thomas Greiss took the loss, falling to 11-7-0 after allowing 3 goals on 11 shots before being pulled in the 1st period.

The Minnesota Wild will look to build on back-to-back wins after a 6-4 win over Colorado last time out. Carson Soucy opened the scoring for the Wild and Eric Staal doubled the lead just 3:49 later but the Avs would tie the game at two after 20 minutes of play with a pair of goals :46 apart. Brad Hunt gave Minnesota the lead just after the midway point of the 2nd period but Colorado would tie the game again in the last minute of the 2ndperiod and go ahead 4-3 early in the 3rd. However, Mats Zuccarello and Victor Rask scored in a span of 1:17 to tie the game and give Minnesota a 5-4 lead they wouldn’t let go of as Ryan Suter buried an empty-netter to give the Wild an insurance marker and the final 6-4 score line. Devan Dubnyk got the win to improve to 7-8-2 after allowing 4 goals on 44 shots faced in the winning effort.

This line feels a bit funny to me, as both teams have the same record over their last 10 games, but hey I’m not complaining. The Isles have played better for much of the season, but their play has tailed off a bit as of late on the road and the Wild have been lights out at home for whatever reason. We’re also getting the team in better recent form with the Wild so I’ll take it and side with Minnesota here.