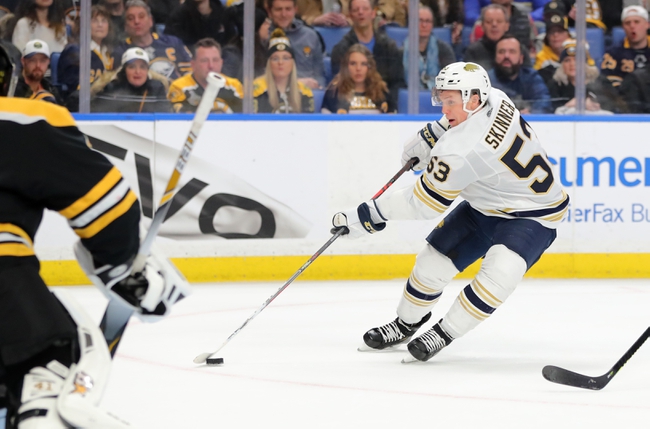 Where to Watch: NESN, MSG-Buffalo Stream live sports and exclusive originals on ESPN+. Sign up now!

The Buffalo Sabres and the Boston Bruins meet in an Atlantic division matchup in NHL action from the TD Garden on Sunday.

The Buffalo Sabres come into the game looking to bounce back after consecutive losses while the Bruins look to build on back-to-back wins after a 3-0 Bruins win over Buffalo last time out.

Patrice Bergeron opened the scoring for Boston on the power play with :22 to go in the opening frame with David Pastrnak and Brad Marchand assisting on the goal. The 2nd period saw the same as Bergeron doubled his goal tally late in the 2nd period with Marchand and Pastrnak each logging an assist there as well. The Bruins would carry the lead into the 3rd and ice the win with Brandon Carlo scoring on an empty net while the Sabres were unable to breach Boston’s goal.

Jaroslav Halak picked up the win between the pipes for Boston, improving to 9-3-4 on the year after stopping all 26 shots faced for his 3rd shutout of the season while Linus Ullmark ended up with the loss, falling to 11-9-3 after allowing two goals on 24 shots faced in the losing effort.

I’m not trying to count my chickens before they hatch, but maybe Boston is finally turning a corner after struggling for much of the last few weeks. On the other hand, Buffalo can’t buy a win, especially away from home where they’ve now lost 13 of their last 15 games and now have to go to Boston where the Bruins have been tough to take down all season long. Boston did the hard part by beating Buffalo in the Sabres’ own arena where they do their best work, and at home, I think the Bruins sweep the home-and-home by a couple of goals so I’ll side with Boston on the puck line here.