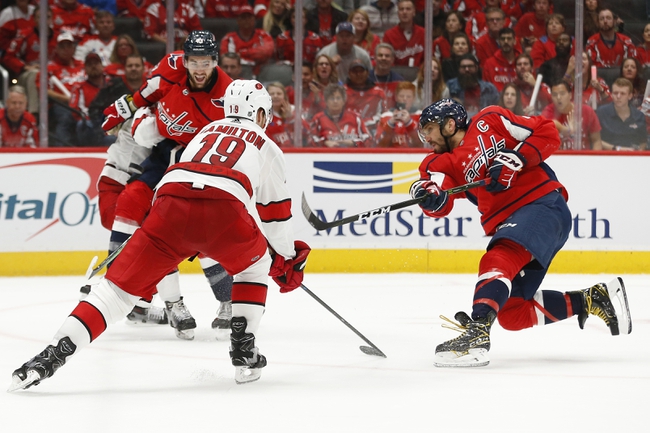 Where to Watch: NBCS-Washington, FS-Carolina Stream live sports and exclusive originals on ESPN+. Sign up now!

The Washington Capitals and the Carolina Hurricanes meet in NHL action from the PNC Arena on Saturday night.

The Washington Capitals will look to build on a 2-1 OT win over the Columbus Blue Jackets last time out. The game was scoreless through the opening 20 minutes before Columbus took the lead just before the midway point of the 2nd period. That lead would hold up through the rest of the 2nd and the early parts of the 3rd before Carl Hagelin tied the game at one. The rest of the 3rd wouldn’t produce a winner, so it was off to overtime where T.J. Oshie finally potted the winner for Washington and snapped Columbus’ winning streak with just under two minutes to go. Ilya Samsonov got the win to improve to 10-2-1 on the year after stopping 27 of 28 shots faced in the winning effort.

The Carolina Hurricanes will look to bounce back and snap a three-game losing streak after a 5-3 loss to the New York Rangers last time out. Lucas Wallmark opened the scoring for the Canes just over five minutes into the game before New York tied the game at one later in the opening period. New York surged ahead 4-1 before Brett Pesce cut the deficit back to 4-2 late in the 2nd and Sebastian Aho made it 4-3 early in the 3rd, but that’s as close as Carolina got as the Rangers added an insurance goal for a 5-3 lead that the Rangers would ride to the finish line despite the Hurricanes outshooting New York 14-5 in the 3rd period. James Reimer took the loss, falling to 8-6-0 on the year after allowing all 5 goals on 24 shots faced in the losing effort.

I’ve gone back and forth on this game, as Carolina has had the bulk of the success against the Capitals. However, both teams are on a back-to-back, and the Hurricanes had to travel farther for this game from New York than Washington did from Columbus. Both of these teams have had success on no rest, but we’re getting plus money with a Washington team that’s the best on the road this season. I’ll take my chances with Washington and the plus money here.