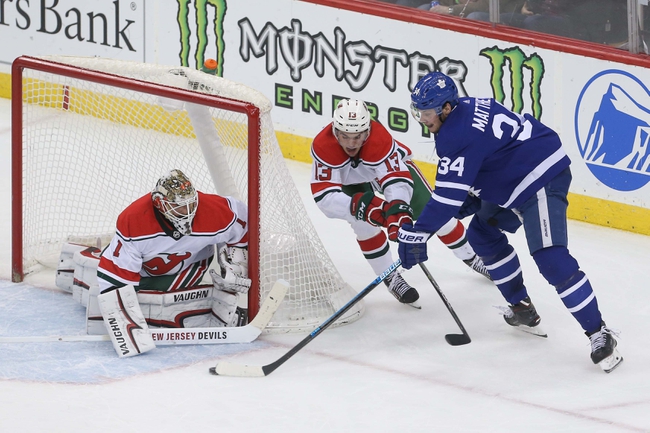 Where to Watch: TVA, MSG+ Stream live sports and exclusive originals on ESPN+. Sign up now!

The Toronto Maple Leafs and the New Jersey Devils meet in NHL action from the Prudential Center on Friday night.

The Toronto Maple Leafs come into this game looking to extend their current five-game winning streak after a thrilling 8-6 win over Carolina in their last outing. The game got off to a flying start as Jason Spezza opened the scoring just :30 into the game before William Nylander and John Tavares each had a power play goal 1:30 apart to push Toronto ahead 3-0 just 5:10 into the game, chasing James Reimer from the Hurricanes’ goal. Carolina made it a 3-2 game by the end of the first period and went ahead 5-3 late in the 2nd with 3 goals in a span of 1:04, including the first two goals coming just :20 apart. Auston Matthews pulled a goal back for the Leafs early in the 3rd but Carolina would restore the two goal lead at 6-4. Mitch Marner had a pair of goals that sandwiched a Tyson Barrie goal with 3 goals in a span of :54 for Toronto to push the Leafs 7-6 ahead, with the latter two goals coming :06 apart. Pierre Engvall iced the win with an empty-netter late in the 3rd. Frederik Andersen got the win to improve to 19-8-3 despite giving up 6 goals on 40 shots faced in the winning effort.

The New Jersey Devils will look to pick up where they left off after a 7-1 win over the Chicago Blackhawks in their last outing. Chicago opened the scoring just 3:21 into the game, but that’s where the Blackhawks’ luck ran out as Jack Hughes tied the game at one for the Devils by the end of the opening period. P.K. Subban scored just :51 to give the Devils a 2-1 lead, before Damon Severson and John Hayden scored 3:18 apart to push the Devils ahead 4-1 and Travis Zajac added a 5th with New Jersey short-handed to take a commanding lead into the 3rd. Blake Coleman tallied a 6th :18 into the 3rd period before Pavel Zacha slid home a 7th for good measure. MacKenzie Blackwood got the win to improve to 11-10-4 on the year after stopping 32 of 33 shots faced in the winning effort.

Part of me wants to give New Jersey a chance here after the Leafs were up and down against the Hurricanes, but the fact is that Toronto’s offense is clicking right now, and it’s helped the team get results as Toronto’s won five straight and the Leafs are thriving under their new head coach. New Jersey is the same struggling team we thought they’ve been all season, and a win over Chicago isn’t going to move the needle much for me. I’ll side with Toronto to keep the ball rolling and I’ll side with Toronto on the puck line as I see the Leafs throttling the Devils here.