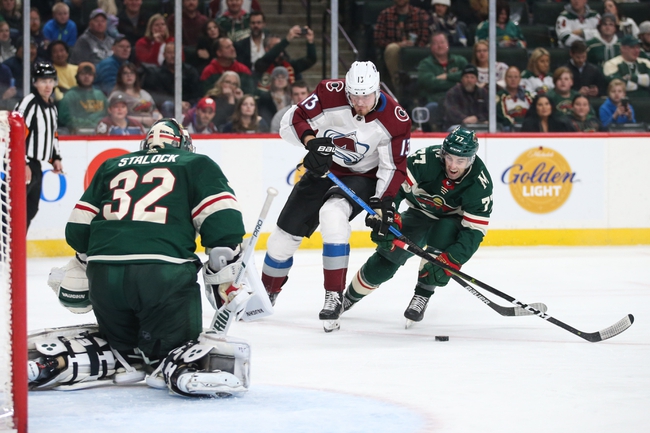 The Minnesota Wild and the Colorado Avalanche meet in NHL action from the Pepsi Center on Friday night.

The Minnesota Wild will come into this game looking to build on a 3-0 win over the Calgary Flames in their last outing. The game was scoreless through the opening 20 minutes before Joel Eriksson Ek and Luke Kunin scored 4:58 apart to take a 2-0 lead. That 2-0 lead would hold up through the second and most of the 3rdbefore Eric Staal added an empty-netter with just under three minutes to play as Minnesota held on for the victory. Devan Dubnyk got the win to improve to 6-8-2 on the year after stopping all 22 shots faced in the winning effort for his 1st shutout of the season.

The Colorado Avalanche will look to build on a 7-3 beatdown of Vegas in their last outing. Pierre-Edouard Bellemare opened the scoring less than five minutes in for the Avs before Vegas tied the game at one just after the midway point of the opening period. Matt Nieto scored short-handed and Nazem Kadri made it 3-1 after 20 minutes of play. Vegas pulled one back but Landeskog and the previously mentioned Bellemare would push the lead to 5-2 after the 2nd period. Vegas pulled one back again, but this time the Avs slammed the door shut for good with a goal from Mikko Rantanen just 1:51 later and Valeri Nichushkin with 1:07 to go in the game. Pavel Francouz got the win to improve to 11-2-1 on the year after stopping 29 of 32 shots faced in the winning effort.

The plus money with Minnesota is tempting here, as the Wild have played a lot better than their start to the year and Colorado’s had a couple of slip ups at home lately. However, the Avalanche are still a strong team on home ice and have gotten the better of the Wild in Colorado in recent years. I also like the goaltending tandem of Francouz and Grubauer more than I do Stalock and Dubnyk for Minnesota, so I’ll side with Colorado in regulation to get a more favorable price.