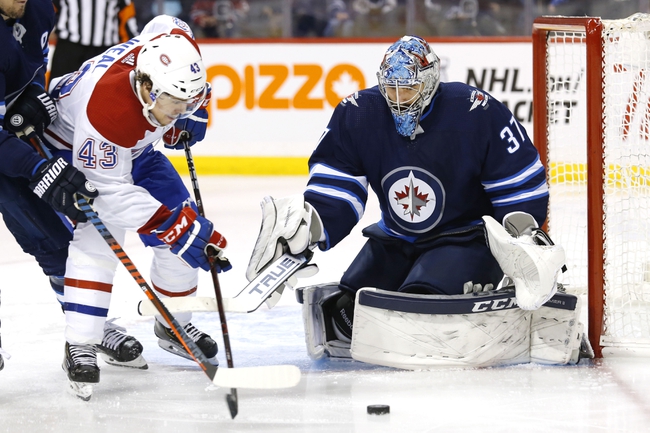 The Montreal Canadiens and the Winnipeg Jets meet in NHL action from Bell MTS Place on Monday night.

The Montreal Canadiens will look to bounce back after a 4-3 overtime loss to Edmonton last time out. Edmonton opened the scoring just 1:30 into the game and doubled their last with just over eight minutes to go in the first before Jeff Petry got Montreal on the board just 2:28 later. Phillip Danault tied the game early on in the 2nd before Edmonton re-took the lead late in the 2nd. Max Domi tied the game for Montreal again early on in the 3rd, but the Oilers would once again re-take the lead with 12:12 to go and Edmonton would hold on for the win from there on out. Carey Price took the loss, falling to 15-11-3 after giving up all 4 goals on 26 shots faced in defeat.

The Winnipeg Jets will look to build on a 6-0 blanking of Minnesota in their last outing. Blake Wheeler opened the scoring short-handed for the Jets with just over five minutes to go in the first before Mark Scheifele doubled the lead with :07 to go in the opening frame. Patrik Laine made it 3-0 just after the midway point of the 2ndbefore Nikolaj Ehlers made it 4-0 1:09 into the 3rd. Laine added his 2nd and Logan Shaw pushed the lead to 6-0 in a span of 1:38 as Winnipeg would ride that lead to the finish line. Connor Hellebuyck got the win to improve to 17-10-2 by stopping all 31 shots faced in the winning effort for his 3rd shutout of the season.

I’ve really been impressed with what Winnipeg has done up until now, but this line smells fishy to me as the Jets should probably be heavier favorites given how they’ve played lately. Montreal has had their ups and downs and lost a close one to Edmonton in their last outing, but the Habs were on a back-to-back there and like most teams, are a better side when they’ve had time to recoup. Add in the success that Montreal’s had against the Jets over the years, and I think Montreal’s worth a shot at plus money here.