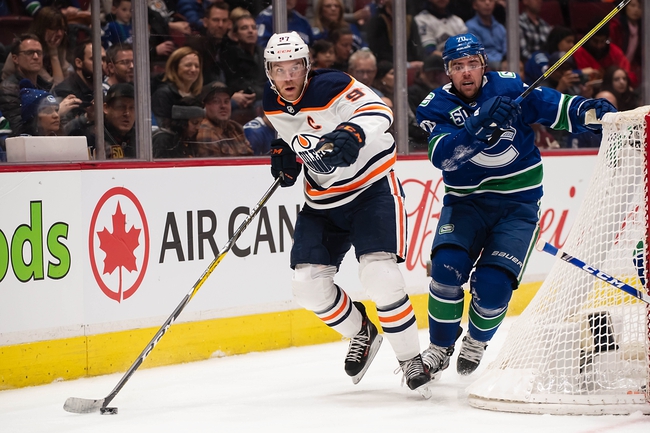 Where to watch: SN-Pacific, SN-West Stream live sports and exclusive originals on ESPN+. Sign up now!

The Edmonton Oilers and the Vancouver Canucks meet in NHL action from the Rogers Arena on Monday night.

The Edmonton Oilers will look to build on a 4-3 win over the Montreal Canadiens in their last outing. Leon Draisaitl opened the scoring for the Oilers just 1:30 into the game before Josh Archibald doubled the lead with just over eight minutes to go in the opening period. Montreal pulled a goal back just 2:28 later, giving us a 2-1 game heading into the 2nd. Montreal tied the game at two before Connor McDavid restored Edmonton’s advantage with 4:20 to go in the 2nd period. Montreal tied the game against early in the 3rd before Riley Sheahan gave Edmonton the lead for good as the Oilers held on for the remaining 12:12. Mikko Koskinen got the win to improve to 13-6-2 on the year after stopping 23 of 26 shots faced in the winning effort.

The Vancouver Canucks will look to build on back-to-back wins after a 4-1 win over Pittsburgh in their last outing. Jake Virtanen and J.T. Miller staked Vancouver a 2-0 lead in the first period with a pair of goals 1:50 apart and would hold that lead for much of the 2nd before Pittsburgh got on the board with less than five minutes to go in the 2nd. Elias Pettersson responded just :44 later to restore the Canucks’ two-goal lead and Brock Boeser added a 4th for insurance in the latter stages of the 3rd period. Jacob Markstrom got the win to improve to 11-11-3 on the year after stopping 28 of 29 shots faced in the winning effort.

The Oilers pulled out a solid win over the Canadiens, but this is still an Edmonton team that’s struggled lately, including a fair share of struggles on the road. Vancouver tends to do their best work at home and looked really good in shutting down the Penguins last time up. Edmonton also hasn’t had a lot of success against the Canucks in this venue so I’ll side with the Canucks in this one.