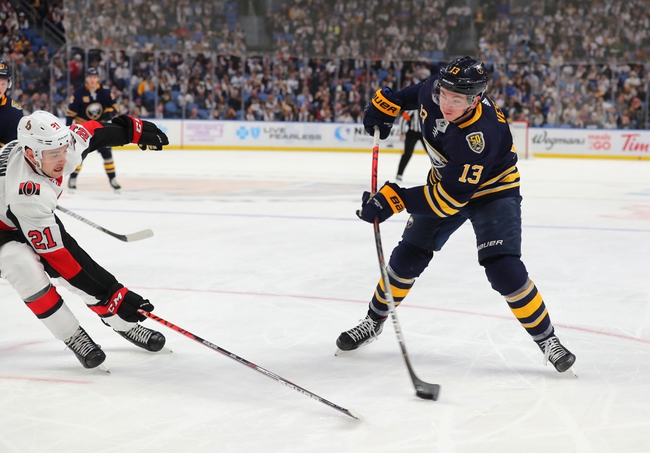 The Buffalo Sabres and the Ottawa Senators meet in NHL action from the Canadian Tire Center on Monday night.

The Buffalo Sabres will look to build on a 3-2 win over Los Angeles in their last outing. The game was scoreless through the opening 20 minutes before Los Angeles took the lead 1:32 into the 2nd period. Rasmus Ristolainen tied the game at one just over six minutes later and Marco Scandella gave the Sabres the lead before the end of the 2nd period. Victor Olofsson would give Buffalo a 3-1 lead with an empty-netter with 1:33 to go, but Los Angeles would make things interesting, scoring with :38 to go to make it 3-2. That was as close as the Kings got though, as Buffalo slammed the door shut the rest of the way. Linus Ullmark got the win to improve to 11-7-3 on the year after stopping 25 of 27 shots faced in the winning effort.

The Ottawa Senators will look to rebound after a 5-4 shootout loss to Philadelphia in their last outing. Philadelphia jumped out in front 3:16 into the game before doubling the lead 1:03 into the 2nd period. Tyler Ennis and Mark Borowiecki scored :25 apart to tie the game for Ottawa and Anthony Duclair would give the Sens the lead late in the 2nd period but the Flyers would tie the game again just :51 later. Philadelphia re-took the lead 1:10 into the 3rd before Ennis tied the game at four with his 2nd goal of the game just after the midway point of the 3rd period. The rest of the 3rd couldn’t produce a winner and neither did OT, so it was off to the shootout where Philadelphia scored the lone goal in six attempts combined from both sides, giving the Flyers the win and the extra point. Marcus Hogberg took the loss, falling to 1-1-2 after allowing 4 goals on 38 shots faced in defeat.

Buffalo has proven time and time again that they’re the definition of fade material on the road, as the Sabres have lost 12 of their last 14 games away from Buffalo while Ottawa has shown immense signs of improvement on home ice, going 8-1-1 in their last 10 games in Ottawa. The Senators are just one of those teams that I back at home and usually fade on the road, while Buffalo is turning into fade material no matter where they’re playing. Add in that we’re getting plus money and I’ll side with the Senators to get the job done at home.