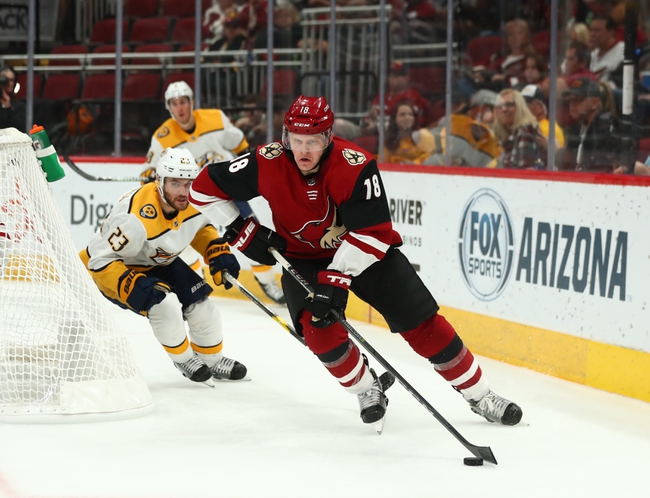 Where to Watch: FS-Arizona+, FS-Tennessee Stream live sports and exclusive originals on ESPN+. Sign up now!

The Arizona Coyotes and the Nashville Predators meet in NHL action from Bridgestone Arena on Monday night.

The Arizona Coyotes will look to build on a 5-2 win over the Detroit Red Wings in their last outing. Clayton Keller staked the Coyotes an early 2-0 lead with a pair of goals 3:18 apart before Carl Soderberg pushed Arizona’s lead to 3-0 with the lone goal of the 2nd period. Taylor Hall pushed the lead to 4-0 early in the 3rdbefore Detroit finally got on the board just before the midway point of the 3rd period. Christian Dvorak scored just :27 later to restore the four-goual cushion but Detroit would pull a consolation goal back with four and a half minutes to go. 5-2 was as close as Detroit got as Arizona slammed the door shut and sent the Red Wings spiralling to another loss. Antti Raanta got the win to improve to 6-5-2 after stopping 28 of 30 shots faced in the winning effort.

The Nashville Predators will look to build on a 4-3 overtime win over Boston last time out. The game was scoreless through the opening 20 minutes before Boston took the lead 7:30 into the 2nd period. Roman Josi gave the Predators a game-tying goal less than five minutes later before Boston re-took the lead in the last minute of the 2nd period. Filip Forsberg tied the game and Josi gave Nashville the lead with a pair of goals :35 apart, but the Predators couldn’t hold on as Boston tied the game with 1:05 to go in regulation. The game went to OT and looked possibly destined for a shootout before Ryan Ellis potted the game-winner with :55 to play. Pekka Rinne got the win to improve to 12-5-3 after stopping 29 of 32 shots faced in the winning effort.

I say it here and I normally say it with Arizona games on the Puck Dawgz portion of the Youtube show, but I try to not read too much into head-to-head trends with the Coyotes as none of those teams were as good as what this year’s team has brought to the table. However, Arizona has struggled on the end of a back-to-back historically, and the Coyotes have lost 4 of 6 games playing on no rest this season, including losses in three straight in that spot. Nashville showed some solid signs of life against Boston and the Predators have had the upper hand on Arizona in this building for some time now and the home team has dominated the series. I’ll side with Nashville as I expect there to be tired legs on Arizona’s side.