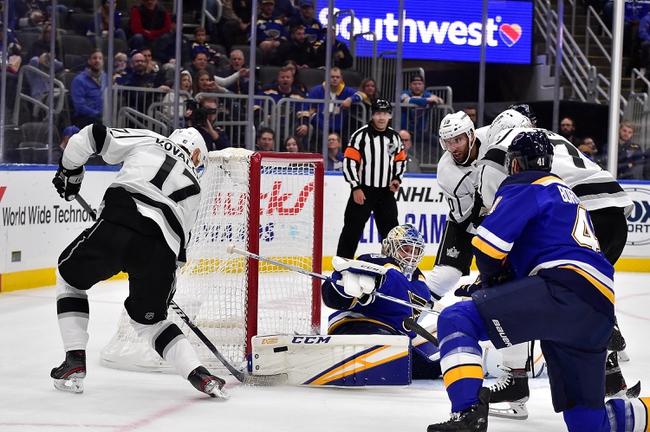 Where to Watch: FS-Midwest, FS-West Stream live sports and exclusive originals on ESPN+. Sign up now!

The St. Louis Blues and the Los Angeles Kings meet in NHL action from Staples Center on Monday night.

The St. Louis Blues will look to add to their current five-game winning streak after a 5-2 win over San Jose in their last outing. The game was scoreless through the opening 20 minutes before san Jose opened the scoring :42 into the 2nd period. Jordan Kyrou tied the game for the Blues just 1:22 later and Jaden Schwartz gave St. Louis the lead just 3:26 later before the Sharks tied the game at two heading into the 3rd period. Alex Pietrangelo gave St. Louis a 3-2 lead just after the midway point of the 3rd period before Ryan O’Reilly and Pietrangelo each scored on an empty net one minute apart late in the 3rd to make the game 5-2. Jake Allen got the win to improve to 7-2-2 on the year after stopping 34 of 36 shots faced in the winning effort.

The Los Angeles Kings will look to rebound from back-to-back losses after a 3-2 loss to Buffalo in their last outing. The game was scoreless after the first period before Adrian Kempe gave L.A. the lead 1:32 into the 2ndperiod. Buffalo would surge ahead 2-1 by the end of the 2nd period and pushed ahead 3-1 with an empty net goal late in the 3rd. Dustin Brown pulled a goal back with :38 to go, but 3-2 was as close as the Kings got as the Sabres slammed the door shut on any comeback attempt. Jonathan Quick took the loss, falling to 10-13-2 after allowing a pair of goals on 27 shots faced in the losing effort.

The Blues come into this one red-hot winning five straight while the Kings had a respectable showing on their road trip, picking up points in all six games. I could see the Kings getting up for the task and giving St. Louis a run, but it usually takes teams a game or two to find your feet at home and the defending champions are not the team I’d want to see on the other side when you’re trying to reacclimate yourself. I’ll back the Blues here to extend their winning streak.