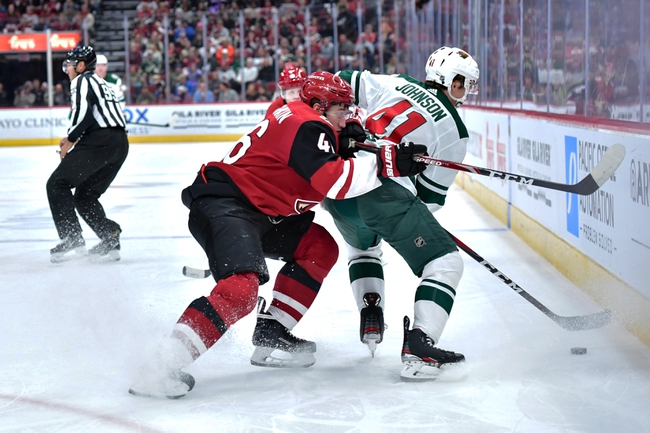 The Arizona Coyotes and the Detroit Red Wings meet in NHL action from Little Caesars Arena on Sunday night.

The Arizona Coyotes come into this game looking to bounce back after an 8-5 loss to Arizona last time out. Phil Kessel opened the scoring for the Coyotes with the long goal of the opening period before Minnesota went ahead 2-1 with a pair of goals 1:25 apart in the 2nd period. Jakob Chychrun tied the game at two just before the midway point of the 2nd period on the power play before Minnesota restored the lead 1:25 later and went up 4-2 late in the 2nd. Oliver Ekman-Larsson and Chychrun with his 2nd would score 2:34 apart to tie the game at four, but Minnesota would once again respond just a minute later and the two-goal lead was back in effect just :35 after than. Clayton Keller pulled one back for Arizona just :26 later, but 6-5 was as close as it got as Minnesota made it 7-5 just after the midway point of the 3rd and added an empty-netter with :09 to go in the game, securing the win and sending Arizona back empty-handed. Darcy Kuemper took the loss, falling to 15-8-2 after giving up seven goals on 32 shots before leaving the game due to injury.

The Detroit Red Wings will look to rebound after a 4-1 loss to Toronto on Saturday night. The game was scoreless through the 1st period and most of the 2nd before Toronto took the lead with just 2:50 to go in the 2ndperiod. The Leafs would storm ahead 4-0 before Tyler Bertuzzi got the Red Wings on the board with a consolation goal with 1:44 to play, but that was as close as Detroit would get as Toronto slammed the door shut on the rest of the game. Calvin Pickard took the loss, falling to 0-2-0 on the year after allowing 4 goals on 20 shots faced in the loss in relief of Jonathan Bernier who left the game due to injury.

This is a harder game to call than I had initially thought, as Kuemper’s injury really throws a wrench into things as the Coyotes aren’t as strong defensively with him between the pipes. However, whatever Arizona does in goal will be better than what Detroit’s dealing with right now, as the Red Wings now have to turn to Jimmy Howard who hasn't started for the Wings in almost a month and wasn't very good even when he was healthy. Anyway, backing the Red Wings on the second half of a back-to-back isn’t an option, much like backing Detroit hasn’t been an option for much of anything this season. I’ll side with Arizona and take the Coyotes on the puck line for some added value.