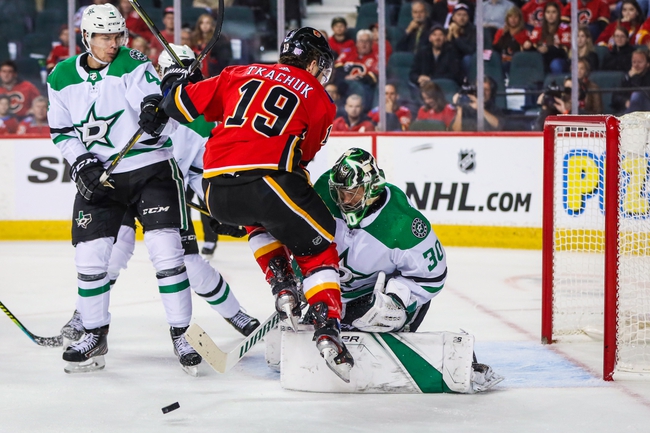 The Calgary Flames and the Dallas Stars meet in NHL action from the American Airlines Center on Sunday night.

The Calgary Flames come into this game looking to snap a three-game losing streak after a 4-3 overtime loss to Montreal in their last outing. Matthew Tkachuk and Elias Lindholm staked the Flames a 2-0 lead after 20 minutes of play before Montreal tied the game at two by the end of the 2nd period. Oliver Kylington gave Calgary a 3-2 lead 6:25 into the 3rd but Montreal would tie the game at three with just over eight minutes to go. The rest of the 3rd period wouldn’t produce a winner, so it was off to overtime where Montreal found the game winner with just over a minute to go in the extra frame. David Rittich took the OT loss, falling to 15-8-5 on the year after giving up 4 goals on 43 shots faced in the losing effort.

The Dallas Stars will also be looking for a bounce back performance after being thumped by Florida last time out by a final score of 7-4. Florida opened the scoring just 4:37 into the game before Denis Gurianov tied the game with just under seven minutes to go in the 1st period. Florida re-took the lead just 1:38 later and followed that up with another five unanswered goals in a span of 10:04 in the 2nd period. Tyler Seguin pulled one back on the power play late in the 2nd, and made it 7-3 with his 2nd of the game early in the 3rd. Jamie Benn tried to make things interesting with a goal with just under seven minutes to go, but that’s as close as Dallas would get as the Panthers held on for the win to knock off Dallas. Ben Bishop took the loss, falling to 12-8-3 after allowing 6 goals on 20 shots before being pulled in the 2nd period.

The Flames and the plus money is kind of tempting as Calgary’s still a team that’s 7-3 in their last 10 games. However, the Flames are still scuffling over the last week, and those losses were coming at home where Calgary is a better team overall. Dallas was thumped by Florida, but the Stars have been really good at home over the last couple of months and have had almost all of the recent success against Calgary. I’ll side with Dallas to get the win in regulation to try to get some value out of the bet.