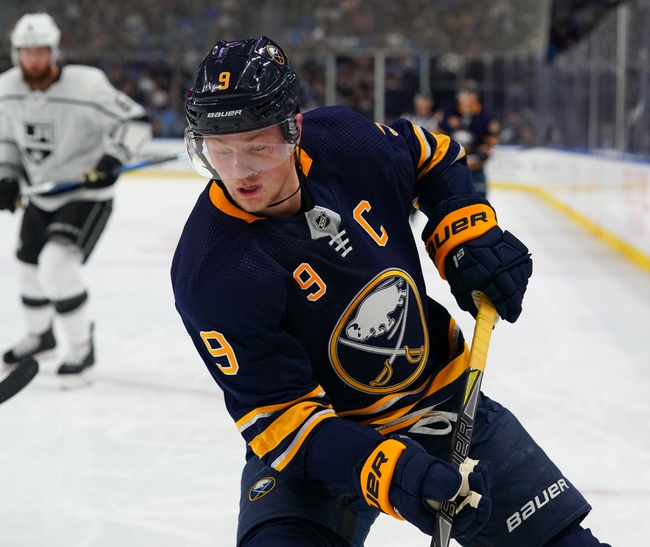 Where to Watch: FS-West, MSG-Buffalo Stream live sports and exclusive originals on ESPN+. Sign up now!

The Los Angeles Kings and the Buffalo Sabres meet in NHL action from the KeyBank Center on Saturday afternoon.

The Los Angeles Kings will look to bounce back after a 3-2 overtime loss to Columbus in their last outing. Adrian Kempe opened the scoring for the Kings just :42 into the game before Columbus tied the game at one just 2:13 later. That 1-1 score would hold through the rest of the first and the first half of the 2nd before Jeff Carter gave the Kings the lead again. Los Angeles would lead 2-1 for the rest of the 2nd and most of the 3rd, almost holding on for the win. However, Columbus tied the game at two with 1:43 to play, forcing overtime and the Blue Jackets picked up the victory just 1:11 into the extra period. Jack Campbell took the OT loss, falling to 5-6-2 after allowing all 3 goals on 28 shots faced in the losing effort.

The Buffalo Sabres will be out to snap a three-game losing streak after a 6-1 loss to the Philadelphia Flyers in their last outing. The Flyers jumped on Buffalo in the 1st period as Philadelphia scored three goals in a span of 4:01 to carry a 3-0 lead into the 2nd and went ahead 6-0 in the 2nd period with another flurry of three goals in a timeframe of 4:07. Victor Olofsson got the Sabres on the board after the midway point of the 3rd period, but it was just a consolation goal as the damage had already been done. Carter Hutton took the loss, took the loss, falling to 6-6-4 on the year after allowing all 6 goals on 29 shots faced in the losing effort.

We’ve made quite a bit backing the Sabres at home and fading the Kings on the road this season, but the Kings are actually playing decent hockey on the road, going 3-0-2 during this road trip. You could make a case for the Sabres being at home, but the Sabres just haven’t been playing well over the last couple of months and I’d imagine that the Kings just want to get back on home ice, but I think Los Angeles will want to sustain their form heading back home and I think the Kings are worth a look with the decent sized plus money.