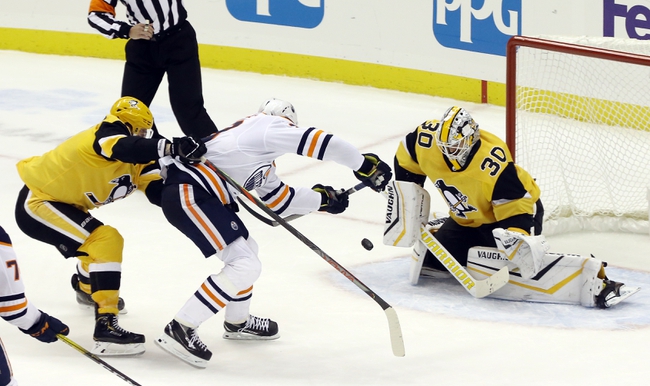 The Pittsburgh Penguins and the Edmonton Oilers meet in NHL action from Rogers Place on Friday night.

The Pittsburgh Penguins will look to build on their current three-game winning streak after a 4-1 win over Calgary in their last outing. Calgary opened the scoring with the lone goal of the opening period before John Marino and Brandon Rust tied the game and gave Pittsburgh the lead in a span of 1:22 just after the midway point of the 2nd period. Calgary tried to tie things up in the rest of the 2nd and most of the 3rd but couldn’t find a game-tying goal as Evgeni Malkin and Kris Letang scored :20 apart on an empty net to pick up the win and send Calgary back empty-handed. Tristan Jarry got the win to improve to 10-5-0 on the year after stopping 33 of 34 shots faced in the winning effort.

The Edmonton Oilers will look to rebound after a 2-1 loss to St. Louis in their last outing. The game was scoreless through the opening 20 minutes before St. Louis got on the board just over eight minutes into the 2ndperiod. The Blues doubled their lead early on in the 3rd, and the 2-0 score would hold through most of the 3rdbefore James Neal pulled a goal back for the Oilers with 1:50 to go in regulation. Despite the Oilers outshooting the Blues 18-10 in the 3rd, Edmonton couldn’t find an equalizer as the Oilers ended up going home with nothing to show for their efforts. Mikko Koskinen ended up with the loss, dropping his record to 12-6-2 on the year despite stopping 42 of 44 shots faced in defeat.

Edmonton as a home dog is tempting, but the Oilers continue to struggle to put consistent results together. Pittsburgh, despite their continuing litany of injuries continue to win hockey games and the Pens love playing the Oilers, winning 18 of the last 24 against Edmonton including each of the last 5 in this arena. I’ll lay the juice with Pittsburgh here.