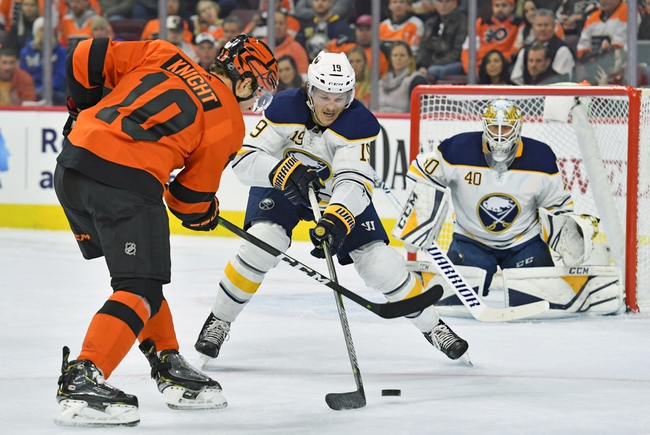 Where to watch: NBCS-Philadelphia, MSG-Buffalo Stream live sports and exclusive originals on ESPN+. Sign up now!

The Buffalo Sabres and the Philadelphia Flyers meet in NHL action from Wells Fargo Center on Thursday night.

The Buffalo Sabres will look to rebound from back-to-back losses after a 5-3 loss to Toronto in their last outing. Toronto opened the scoring just 2:30 into the game and would carry that lead into the 2nd where Toronto would strike twice more to push ahead 3-0. Rasmus Dahlin would get Buffalo on the board 1:29 into the 3rd before Toronto restored the lead just before the five minute mark of the 3rd period. Jack Eichel pulled one back just 1:32 later and Kyle Okposo cut the deficit to 4-3 with just over five minutes to play, but that was as close as Buffalo got as Toronto iced the win with an empty-netter 2:45 later. Linus Ullmark took the loss, falling to 10-7-3 on the year after giving up 4 goals on 32 shots faced in the losing effort.

The Philadelphia Flyers will look to build on a 4-1 win over Anaheim last time out. The game was scoreless through the opening 20 minutes before Claude Giroux opened the scoring :55 into the 2nd period and David Kase would double the lead 3:19 later. Anaheim pulled one back late in the 2nd, before Jakub Voracek restored the two-goal lead early on in the 3rd period. Anaheim outshot the Flyers 13-7 in the 3rd, but the Flyers would ice the win with :08 to go thanks to an empty net goal from Sean Couturier. Carter Hari got the win to improve to 11-7-3 on the year after stopping 40 of 41 shots faced in the winning effort.

This is one of the easier plays on Thursday’s card in my opinion. Buffalo has been a profitable fade on the road for some time now, and while the Sabres have shown signs of improvement over the years, the fact is that Buffalo still isn’t reliable on the road and that’s not good when you’re playing a Flyers team that’s been pretty much lights out at home all season long. I’ll side with the Flyers in regulation to get some value out of the bet.