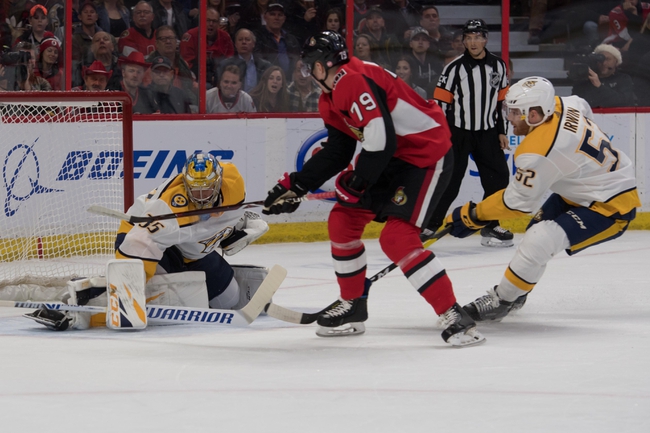 The Nashville Predators and the Ottawa Senators meet in NHL action from the Canadian Tire Centre on Thursday night.

The Nashville Predators come into this game will look to build on back-to-back wins after an 8-3 win over the New York Islanders in their last outing. Craig Smith opened the scoring for the Predators less than five minutes into the opening period before New York scored three goals in a span of 5:16, including a pair of goals 1:48 apart early in the 2nd frame. Filip Forsberg pulled one back :27 later and Smith scored his 2nd of the game just 2:20 after that to tie the game at three. Nick Bonino and Rocco Grimaldi scored :48 apart to go ahead 5-3 after 40 minutes of play. Calle Jarnkrok, Roman Josi and Ryan Johansen all scored in a span of 5:09 in the 3rdperiod to push Nashville ahead 8-3 with seven unanswered goals. Pekka Rinne got the win to improve to 11-5-3 on the year after stopping 27 of 30 shots faced in the winning effort.

The Ottawa Senators will look to rebound from back-to-back losses after a 4-3 overtime loss to Tampa Bay in their last outing. Tampa Bay opened the scoring but Mark Borowiecki tied the game at one just 3:38 later. Tampa Bay would re-take the lead by the end of the 1st and go 3-1 ahead early on in the 2nd. Connor Brown pulled one back just :29 later and Anthony Duclair tied the game by the end of the 2nd. The 3rd period wouldn’t decide a winner, so it was off to overtime and we almost looked destined for a shootout but the Bolts would find the winner with :19 left in the extra frame. Marcus Hogberg took the loss, falling to 0-1-1 on the year after allowing 4 goals on 40 shots faced in the losing effort.

I get Nashville being favored as they’re probably the better team side-by-side and have been playing better overall than Ottawa. However, I’m expecting somewhat of a letdown after the Preds poured in eight against a really good Islanders team that’s been even better on home ice. Ottawa’s been struggling lately, but a lot of those games have come on the road where the Senators have struggled big time compared to their form at home this season. I think that Ottawa is worth a shot at plus money on Thursday.