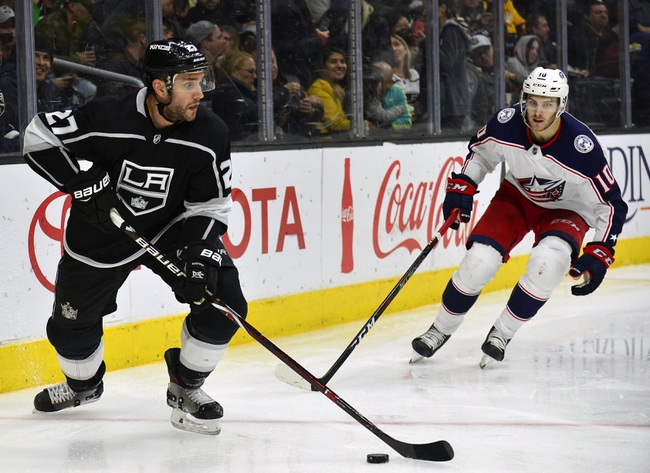 Where to watch: FS-West, FS-Ohio Stream live sports and exclusive originals on ESPN+. Sign up now!

The Los Angeles Kings and the Columbus Blue Jackets meet in NHL action from Nationwide Arena on Thursday night.

The Los Angeles Kings come into this game on the heels of a 4-3 overtime win over the Boston Bruins in their last outing, making it back-to-back wins. Blake Lizotte opened the scoring for the Kings just 2:17 into the game before Boston tied the game at one late in the opening period. Adrian Kempe helped L.A. re-take the lead before Boston tied the game against just after the midway point of the 2nd period. Boston took their first lead of the game early in the 3rd, and Los Angeles almost ran out of time before Matt Roy tied the game with just over two minutes to go in regulation. Anze Kopitar found the OT winner for the Kings with just under two minutes to play in the extra frame to get the Kings the win. Jonathan Quick got the win to improve to 10-12-2 on the year after stopping 37 of 40 shots faced in the winning effort.

The Columbus Blue Jackets will look to build on back-to-back wins after a 5-3 win over Detroit in their last outing. Detroit opened the scoring just 5:11 into the game before Cam Atkinson and Oliver Bjorkstrand scored 1:04 apart to give Columbus a 2-1 lead. Detroit would tie the game at two by the end of the opening period and go 3-2 ahead less than two minutes into the 2nd period. Kevin Stenlund would tie the game at three for Columbus less than five minutes later and Pierre-Luc Dubois would give the Jackets the lead for good 1:19 into the 3rd period. Detroit would try to find a game tying goal, but Gustav Nyquist would slam the door shut with the empty-netter with :07 to go in the game. Joonas Korpisalo got the win to improve to 14-10-3 on the year after stopping 18 of 21 shots faced in the winning effort.

I’ve been quick to rag on the Kings this season, especially on the road, but the Kings have played well away from home lately, picking up seven of a possible eight points in the first four games of this road trip so far. Columbus should be favored at home, but I’m still not sold on the Blue Jackets as a whole and the Kings have owned the Blue Jackets over the last few seasons, so I’ll take a shot with Los Angeles to continue their recent strong road play with a win at plus money here.