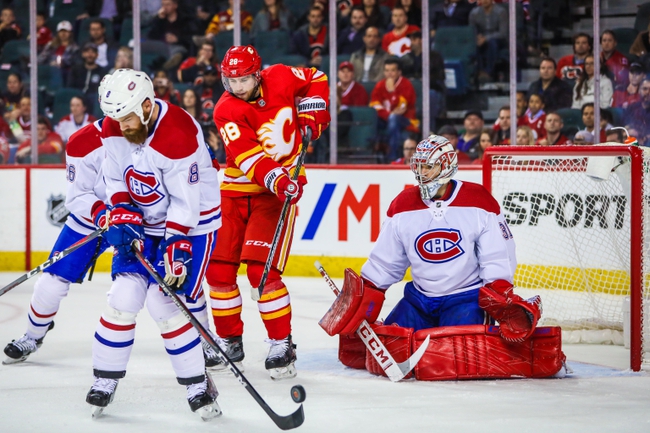 Where to Watch: TSN2 Stream live sports and exclusive originals on ESPN+. Sign up now!

The Montreal Canadiens and the Calgary Flames meet in NHL action from the Scotiabank Saddledome on Thursday night.

The Montreal Canadiens come into this one looking to build on a 3-1 win over Vancouver in their last outing. Vancouver opened the scoring late in the opening period before Nick Cousins tied the game for Montreal just over eight minutes into the 2nd period. Tomas Tatar and Shea Weber pushed Montreal ahead 3-1 with a pair of 3rd period goals 1:34 apart, and the Habs would ride that lead to the finish line despite Vancouver outshooting the Canadiens 10-8 in the 3rd period. Carey Price got the win to improve to 14-10-3 on the year after stopping 38 of 39 shots faced in the winning effort.

The Calgary Flames will look to rebound from back-to-back losses after a 4-1 loss to Pittsburgh in their last outing. Johnny Gaudreau opened the scoring for the Flames with just under four minutes to go in the opening period before Pittsburgh tied the game and took the lead in a span of 1:22 midway through the 2nd period. Pittsburgh added a pair of empty net goals :20 apart to secure the win and send Calgary back empty-handed Cam Talbot took the loss, falling to 3-6-0 on the year after stopping 29 of 31 shots faced in the losing effort.

I can definitely understand Calgary being favored at home, but the Flames have had a couple of hiccups at home lately, losing their last two home games against Carolina and Pittsburgh by a combined total of 8-1. Montreal has started to turn things around after their losing streak by winning 4 of their last 5 games, and the Habs continue to play strong defensive hockey since then as well. Add in Montreal’s success at the Saddledome, and I think Montreal at plus money is worth a play on Thursday.