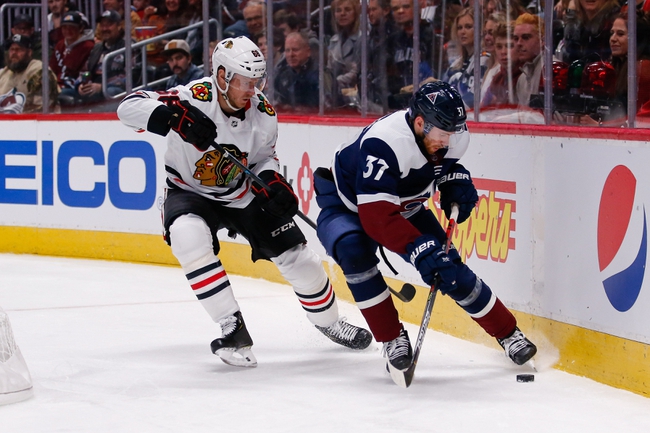 The Colorado Avalanche and the Chicago Blackhawks meet in a Central division matchup in NHL action from the United Center on Wednesday night.

The Colorado Avalanche will look to rebound after a 5-2 loss to the St. Louis Blues last time out. St. Louis opened the scoring late in the 1st with the lone goal of the opening period before Nazem Kadri tied the game at one just :55 into the 2nd period. Mikko Rantanen gave Colorado the lead on the power play just before the midway point of the 2nd period, but St. Louis would be ahead after 40 minutes of play with a pair of goals :36 apart in the last minute and a half of the 2nd period. The Blues added a 4th goal just after the midway point of the 3rd and secured the win with an empty-netter with just under four minutes to play in the 3rd. Philipp Grubauer took the loss, falling to 10-6-2 on the year after allowing 4 goals on 34 shots in the losing effort.

The Chicago Blackhawks will look to build on a 5-3 win over Minnesota last time out. Patrick Kane staked Chicago an early 2-0 lead with a pair of goals 3:51 apart before the Wild pulled a goal back just 1:04 later. Minnesota tied the game two minutes into the 2nd period before David Kampf restored Chicago’s lead just over eight minutes into the 2nd. The Wild would tie the game again heading into the 3rd before Brandon Saad gave Chicago the lead for good at 4-3 and Kane added an empty-netter to complete his hat trick with just over a minute to go. Robin Lehner got the win to improve to 7-6-4 on the year after stopping 23 of 26 shots faced in the winning effort.

I like the idea of Chicago as a home dog, but not when Colorado is on the other side. The Avs have overcome injuries and other issues to be where they are right now, near the top of the division, and are just playing heads and shoulders better than Chicago who continues to be inconsistent despite the amount of talent on the roster. Add in the fact that Colorado’s had a lot of success against Chicago recently and I think you have to side with the Avalanche here, and to cut down the juice, I’ll take Colorado in regulation.