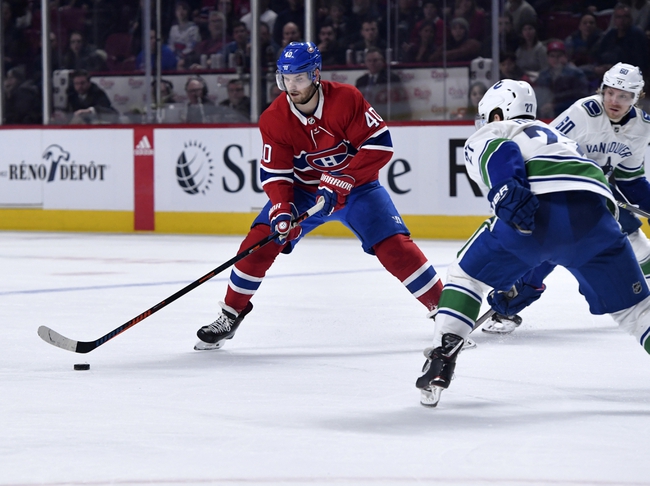 The Montreal Canadiens and the Vancouver Canucks meet in NHL action from Rogers Arena on Tuesday night.

The Montreal Canadiens will look to rebound from a 2-1 loss to Detroit last time out. Detroit opened the scoring 3:21 into the game and held onto that lead through the rest of the 1st and all of the 2nd before doubling the advantage just under eight minutes into the 3rd period. Tomas Tatar would make things interesting with a goal with :47 to go, but that was as close as the Habs got as Detroit slammed the door shut the rest of the way. Carey Price took the loss, falling to 13-10-3 after allowing both goals on 20 shots faced in the losing effort.

The Vancouver Canucks will look to rebound from back-to-back losses after a 6-3 loss to Vegas last time out. Vegas opened the scoring just 2:22 into the game before Elias Pettersson tied the game at one just 1:41 later. Vegas re-took the lead just before the midway point of the opening period. Vegas went ahead 4-1 with a pair of goals before the midway point of the 2nd period before Vancouver pulled a goal back thanks to Brock Boeser just over five minutes into the 3rd period. Vegas responded with just over nine minutes to go before Jake Virtanen scored a power play goal to make it 5-3 with 2:36 to go. That was as close as Vancouver got though, as Vegas scored an insurance goal with :42 to go to seal the win and send the Canucks back empty-handed. Jacob Markstrom got the loss to fall back to 9-10-3 on the year after allowing 5 goals on 39 shots faced in the losing effort.

The Canucks have been a stronger team at home than on the road, but they’ve still allowed four or more goals in four of their last five games. Montreal’s loss to Detroit did a blow to my confidence in the Habs, but the Canadiens have emphasized playing solid defense since breaking out of their slump a few games ago. Add in the fact that Montreal has dominated Vancouver over the last few years and I think the plus money with Montreal is worth a look here.