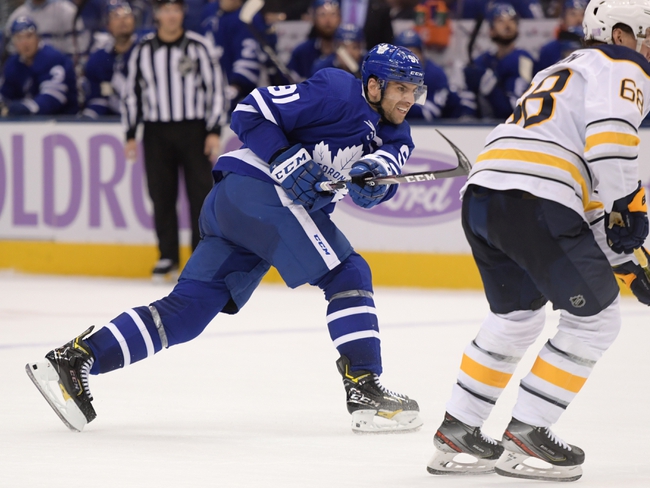 The Buffalo Sabres and the Toronto Maple Leafs meet in an Atlantic division matchup from Scotiabank Arena on Tuesday night.

The Buffalo Sabres will look to rebound from a 3-2 overtime loss to the New York Islanders last time out. New York opened the scoring with the lone goal of the opening period before Victor Olofsson tied the game at one on the power play just over six minutes into the 2nd period. New York took the lead less than five minutes into the 3rd period, but Jack Eichel would tie the game for Buffalo with 1:46 to go in the game, again on the power play for the Sabres. The comeback attempt was shut down by the Isles though, as New York scored the overtime winner with just under two minutes to go in the extra frame. Linus Ullmark ended up with the OT loss, falling to 10-6-3 after allowing 3 goals on 26 shots faced in the losing effort.

The Toronto Maple Leafs will look to build on their 4-1 win over Edmonton in their last outing. Alex Kerfoot opened the scoring with the lone goal of the opening period before Ilya Mikheyev doubled the lead with the only goal of the 2nd period. Edmonton pulled one back early in the 3rd period but Frederik Gauthier restored the two-goal lead with just over six minutes to go and Mitch Marner added an empty-netter to secure the win. Frederik Andersen got the win to improve to 16-8-3 on the year after stopping 36 of 37 shots faced in the winning effort.

Buffalo has been a tough team for Toronto to face this season, as the Sabres won the first meeting in Buffalo and took the Leafs to OT at home in the second meeting on a back-to-back. However, the fact remains that Buffalo is still a profitable team to fade on the road, while Toronto has been better at home and looked pretty good in winning two of three on their Western Canada road trip. Add in the struggles that Buffalo has had against Toronto and I think you have to side with the Leafs at home and to cut down the juice, I’ll side with Toronto on the puck line here.