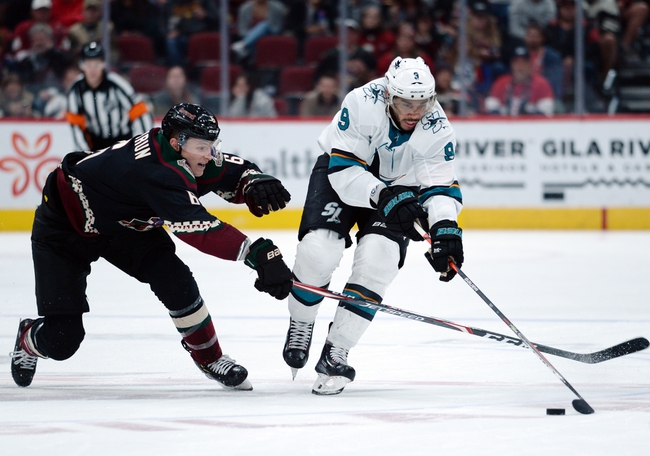 Where to Watch: FS-Arizona+, NBCS-California Stream live sports and exclusive originals on ESPN+. Sign up now!

The Arizona Coyotes and the San Jose Sharks meet in NHL action from the SAP Center on Tuesday night.

The Arizona Coyotes will look to rebound after a 2-1 loss to the New Jersey Devils last time out. New Jersey opened the scoring just 2:17 into the game before Alex Goligoski tied the game at one with just over four minutes to go in the opening frame. The tie would hold up through the 2nd and the first half of the 3rd before the Devils took the lead for good as the Coyotes would be unable to find the equalizing goal the rest of the way. Darcy Kuemper took the loss, falling to 14-7-2 on the year after giving up both goals on 33 shots faced in the losing effort.

The San Jose Sharks will look to build on a 4-2 win over the Vancouver Canucks in their last outing. Tomas Hertl opened the scoring for the Sharks with the lone goal of the opening period and that lead would hold all the way to the 3rd period where Timo Meier doubled the lead just over seven minutes into the final frame. Vancouver pulled one back :48 later, but the Sharks would restore the two-goal lead with 1:21 to go thanks to an empty-net goal from Evander Kane. Vancouver made things interesting, making it 3-2 with :29 to go, but Logan Couture would slam the door shut with another empty-net goal with :08 to go. Aaron Dell got the win to improve to 4-4-1 on the year after stopping 33 of 35 shots faced in the winning effort.

I get San Jose being favored at home, and maybe that win to snap their losing skid will spark a run for the Sharks. But as far as this game goes, there’s too much value to pass up Arizona at plus money here. The Coyotes have been strong on the road this year with a mark of 11-4-2-1 heading into this one and the Coyotes addressed their need for scoring punch by acquiring Taylor Hall from the Devils on Monday. I’m not sure he suits up for this game, but if he does, I only feel stronger about this pick. I’ll take my chances with Arizona at plus money on Tuesday.