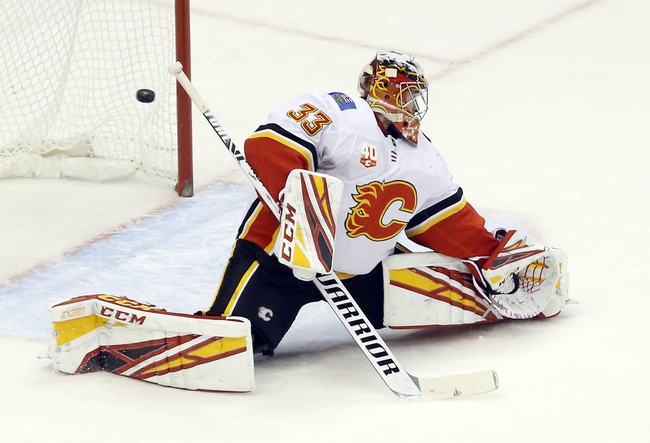 Where to Watch: SN-West, ATT-Pitt Stream live sports and exclusive originals on ESPN+. Sign up now!

The Pittsburgh Penguins and the Calgary Flames meet in NHL action from the Scotiabank Saddledome on Tuesday night.

The Pittsburgh Penguins will look to build on back-to-back victories after a 5-4 shootout win over Los Angeles in their last outing. Los Angeles jumped out to a 2-0 lead after 20 minutes of play before Bryan Rust tied the game at two for Pittsburgh with a pair of 2nd period markers. Teddy Blueger and Jack Johnson would give the Pens a 4-2 lead with a pair of goals 2:32 apart at the midway point of the 3rd, but Los Angeles would answer with a pair of tallies 1:23 apart with less than five minutes to go, sending us to overtime. The extra frame solved nothing, so it was off to the shootout where Rust buried the shootout winner, the lone goal in 8 shots between both sides. Tristan Jarry got the win to improve to 9-5-0 on the year after stopping 38 of 42 shots faced in regulation and OT, as well as all four shots faced in the shootout.

The Calgary Flames will look to rebound after having their seven-game winning streak snapped with a 4-0 loss to Carolina last time out. The game was scoreless through the opening 20 minutes and through the first half of the 2nd period before the ‘Canes struck twice in a matter of 1:05 in the middle period. Carolina would hold that lead through the rest of the 2nd and most of the 3rd before scoring another pair of goals 4:52 apart, including an empty-netter to ice the win and send Calgary back empty-handed. Elias Lindholm led the Flames with 6 shots on goal while Matthew Tkachuk had 4 shots on target as the Flames outshot Carolina 32-31, including 13-9 in the 3rd period. David Rittich took the loss, falling to 15-8-4 after allowing 3 goals on 30 shots faced in the losing effort.

I’ve gone back and forth on this game and while Pittsburgh at plus money is tempting, a lot of the Penguins’ success has come at home where the Penguins have picked up 14 of their 19 wins this season. Calgary plays their best at home and are still playing solid hockey despite their loss to Carolina, so I’ll lay the juice with the Flames here.