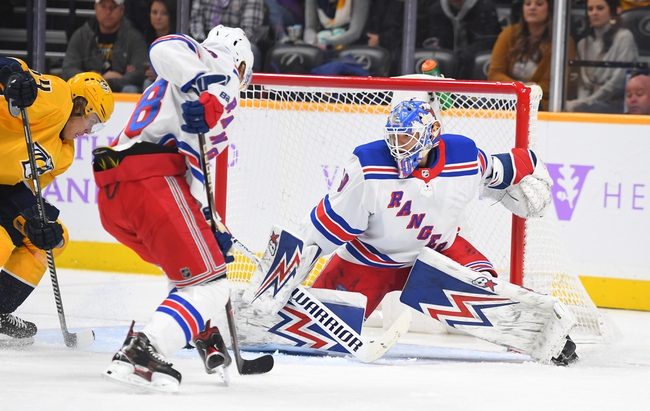 Where to Watch: MSG, FS-Tennessee Stream live sports and exclusive originals on ESPN+. Sign up now!

The Nashville Predators and the New York Rangers meet in NHL action from Madison Square Garden on Monday night.

The Nashville Predators will look to rebound from back-to-back losses after a 4-1 loss to Dallas last time out. The game was scoreless through the opening 20 minutes before Austin Watson gave the Preds the lead 1:04 into the 2nd period. That’s where Nashville’s luck ran out, as Dallas tied the game and took the lead in a span of 1:54 and went up 4-1 with a pair of markers 3:51 apart later in the period. Nashville outshot the Stars 16-3 in the 3rd, but couldn’t find the back of the net again as Dallas held on for the win. Pekka Rinne took the loss, falling to 10-5-3 after giving up 4 goals on 22 shots faced in the losing effort.

The New York Rangers will look to bounce back from a 4-3 shootout loss to Anaheim in their last outing. Mika Zibanejad opened the scoring just :10 into the game before Artemi Panarin doubled the lead just under four minutes into the game. Anaheim pulled one back less than five minutes later and tied the game at two with the lone goal of the 2nd period before Zibanejad scored his 2nd of the game to give the Rangers a 3-2 lead early in the 3rd. The Rangers would almost hold on for the win, but Anaheim would tie the game with less than two minutes to go to force extra hockey. Overtime solved nothing, so it was off to the shootout where Zibanejad scored for New York, but both teams had a goal after the mandatory three rounds. Anaheim found the net in round 4 while New York was held out, giving the extra point to the Ducks. Henrik Lundqvist took the loss, falling to 7-7-3 on the year after giving up 3 goals on 42 shots in regulation and OT as well as two goals on four shots in the shootout.

This line makes zero sense to me. Both teams have been struggling to put consistent results together, and now Nashville is favored on the road after giving up four goals in each of their back-to-back losses? No thanks. It also doesn’t help the Preds that they’re sub-.500 overall and on the road this season. New York’s loss to the Ducks didn’t inspire much confidence, but the Rangers had control for most of the 3rd before letting it slip away. I just think that New York at plus money at home sounds like a good play given Nashville’s recent struggles against the Rangers, so I’ll side with New York here.