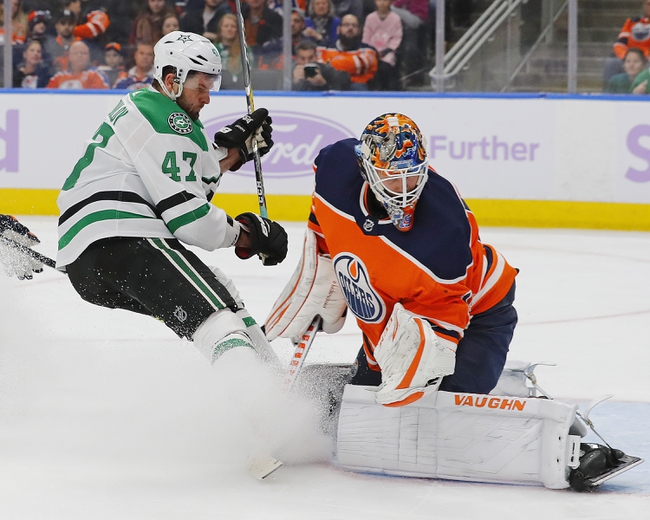 Where to watch: SN-West, FS-West Stream live sports and exclusive originals on ESPN+. Sign up now!

The Edmonton Oilers and the Dallas Stars meet in NHL action from the American Airlines Center on Monday night.

The Edmonton Oilers will be out to snap a four-game losing streak after a 4-1 loss to Toronto last time out. Toronto opened the scoring with the lone goal of the opening period and doubled the lead with the lone goal of the 2nd period. Alex Chiasson pulled one back for Edmonton, but the Oilers didn’t know that that was as close as they would get as Toronto would restore the two-goal lead with just over six minutes to go, and added an empty-netter late to lock up the win. Mikko Koskinen took the loss, falling to 11-5-2 on the year after stopping 28 of 31 shots faced in the losing effort.

The Dallas Stars will look to build on a 4-1 win over the Nashville Predators in their last outing. The game was scoreless through the opening 20 minutes before Nashville got on the board 1:04 into the 2nd. Blake Comeau tied the game on the power play and Roope Hintz gave the Stars the lead just 1:54 later. Jamie Oleksiak and Andrew Cogliano would score 3:51 apart to push Dallas’ lead to 4-1 and the Stars would ride that lead to victory as Nashville went home empty-handed. Anton Khudobin got the win to improve to 7-5-1 on the year after stopping 37 of 38 shots faced in the winning effort.

Part of me is always intrigued when I see Edmonton and plus money, but the Oilers are struggling right now and we’re starting to see the effect it has on Edmonton when teams shut down Connor McDavid and Leon Draisaitl. When you lock up those two, the Oilers don’t produce a whole lot of offense. Dallas continues to play solid hockey, especially at home and the American Airlines Center has been a house of horrors for the Oilers over the years. I’ll side with Dallas and I’ll back the Stars in regulation to get a more favorable price.