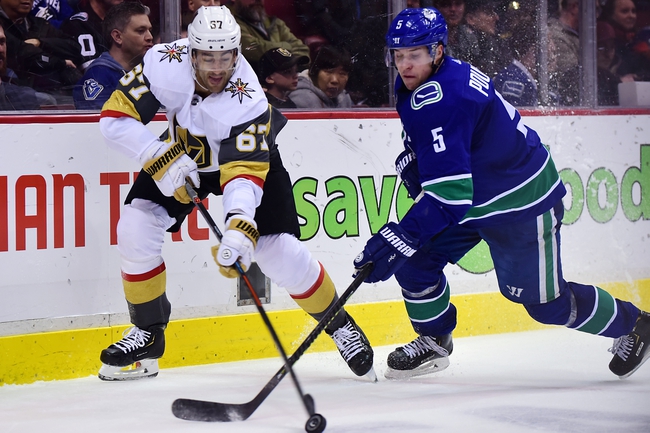 The Vancouver Canucks and the Vegas Golden Knights meet in NHL action from the T-Mobile Arena on Sunday night.

The Vancouver Canucks will look to rebound after a 4-2 loss to the San Jose Sharks last time out. San Jose went just 1-0 just after the midway point of the opening period, and carried that lead through the first, through the 2nd and the early stages of the 3rd before going up 2-0 just over seven minutes into the 3rd. Jake Virtanen responded just :48 later, but the Sharks would restore the two goal lead with an empty-netter. Bo Horvat made things interesting, cutting the deficit to 3-2 with :29 to go, but San Jose iced the win with another empty net goal to secure victory. Jacob Markstrom took the loss, falling to 9-9-3 on the year after giving up two goals on 25 shots in defeat.

The Vegas Golden Knights will look to build on a 3-2 overtime win over the Dallas Stars in their last outing. Dallas opened the scoring with the lone goal of the first period before William Karlsson tied the game at one just 4:20 into the second and Chandler Stephenson gave Vegas a 2-1 lead later in the middle frame. Dallas tied the game at two with just over five minutes to play, but Max Pacioretty would give the Knights the win in overtime, scoring just :51 into the extra frame to give Vegas the win. Malcolm Subban got the win in goal to improve to 5-5-3 on the year after stopping 28 of 30 shots faced in the winning effort.

This feels like a thick line for a Vegas team that hasn’t been as dominant at home like they have been in years past, but the Golden Knights have owned Vancouver since their inception into the league, winning 7 of 8 all-time meetings, and Vancouver is on the 2nd half of the back-to-back after a frustrating loss to San Jose on Saturday. Vegas is one of the three lucky teams to have had the day off on Saturday and I think with the rest advantage and being at home, Vegas has to be the play and since five of Vegas’ seven all-time wins have come by at least two goals, I’ll back Vegas on the puck line to get the price down.