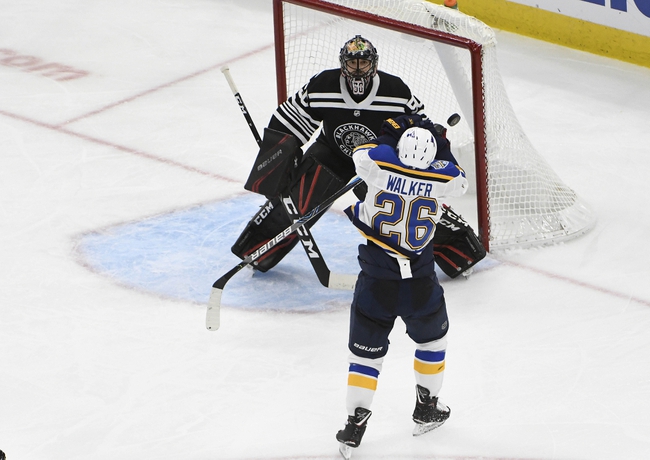 Where to Watch: FS-Midwest, NBCS-Chicago+ Stream live sports and exclusive originals on ESPN+. Sign up now!

The Chicago Blackhawks and the St. Louis Blues meet in a Central division clash in NHL action from the Enterprise Center on Saturday night.

The Chicago Blackhawks will look to snap a three-game losing streak after a 5-2 loss to Arizona in their last outing. Arizona jumped out to an early 3-0 lead after 20 minutes of play before Jonathan Toews got the Blackhawks on the board just over six minutes into the 2nd. Arizona restored the three-goal cushion just 2:23 later before Dylan Strome pulled a goal back with just over seven minutes to go in the 3rd. it wasn’t enough though, as Arizona added an insurance goal with just over two minutes to play to seal the deal and secure the win, sending Chicago back empty-handed. Robin Lehner got the loss, falling to 6-6-4 on the year after giving up 5 goals on 40 shots faced in the losing effort.

The St. Louis Blues will look to build on a 4-2 win over Vegas in their last outing. MacKenzie MacEachern gave St. Louis the lead just 4:52 into the game, but the lead lasted all of :25 before Vegas tied the game at one. The Golden Knights took the lead by the end of the 1st period before Oskar Sundqvist tied the game at two 1:34 into the 2nd. Jaden Schwartz and Robert Thomas scored :39 apart to push St. Louis ahead 4-2 late in the 2nd, and that’s all the Blues would need as St. Louis rode that lead to the finish line. Jordan Binnington got the win to improve to 14-6-4 on the year after stopping 27 of 29 shots faced in the winning effort.

I would be tempted to take a shot on Chicago and the heavy plus money if the Blackhawks weren’t back to struggling, losers of three straight coming into this one. St. Louis rebounded with a win over Vegas at home last time out and I just think that the Blues use this game to catapult into another one of those extended winning streaks. I just like what I’ve seen from St. Louis a lot more than what Chicago’s brought to the table, especially on the road, so I’ll side with St. Louis on the puck line here.