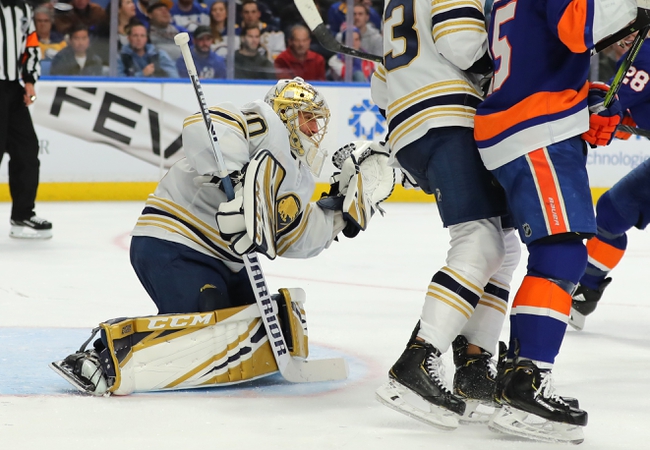 Where to watch: MSG-Buffalo, MSG+ Stream live sports and exclusive originals on ESPN+. Sign up now!

The Buffalo Sabres and the New York Islanders meet in NHL action from Nassau Coliseum on Saturday afternoon.

The Buffalo Sabres come into this game looking to build on their current three-game winning streak after a 4-3 win over Nashville in their last outing. Nashville opened the scoring just :57 into the game before Jimmy Vesey got the Sabres on the board with just over five minutes to go in the opening period. Nashville re-took the lead just :59 later, carrying the 2-1 lead into the 2nd. Jack Eichel scored 4:55 into the 2nd and scored his 2nd of the period to give Buffalo the lead before Nashville tied the game 1:46 later. Victor Olofsson gave the Sabres the lead for good with the lone goal of the 3rd period to give Buffalo another win. Linus Ullmark picked up the win for Buffalo, improving to 10-6-2 after stopping 36 of 39 shots faced in the winning effort.

The New York Islanders come into this game looking to build on back-to-back wins after a 3-1 win over Florida last time out. The score was tied at zero through the opening 20 minutes before Devon Toews opened the scoring for the Isles just :49 into the 2nd. Mathew Barzal doubled the lead just 3:51 later before Florida finally got on the board just before the midway point of the middle frame. Florida tried to get back on level terms the rest of the way, but the Islanders would ice the win with an empty-netter with :03 to go from Anders Lee to secure the win and send Florida back empty-handed. Thomas Greiss got the win to improve to 11-4-0 on the year after stopping 32 of 33 shots faced in the winning effort.

Part of me considered Buffalo as the underdog has won 4 of the last 5 head-to-head meetings, but the Islanders have been just too good on home ice, and that’s not good news for a Buffalo team that’s struggled on the road for some time now and have had issues beating the Islanders on the road for a while now. I’ll side with New York and to get some value on the bet I’ll take New York on the puck line here.