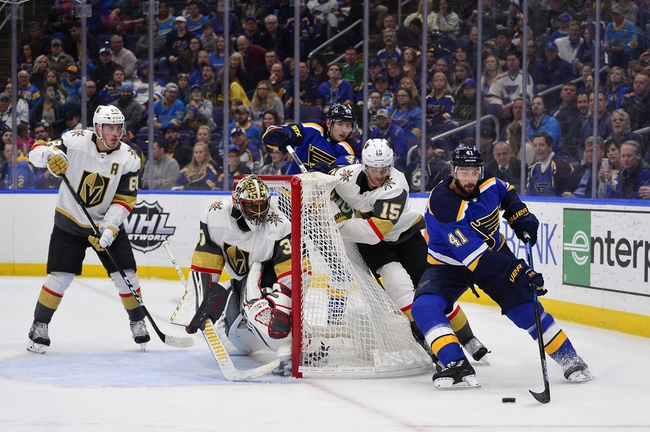 Where to Watch: ATT-RM, FS-Midwest Stream live sports and exclusive originals on ESPN+. Sign up now!

The Vegas Golden Knights and the St. Louis Blues meet in NHL action from the Enterprise Center on Thursday night.

The Vegas Golden Knights will look to build on a 5-1 win in their last outing over Chicago. The game was scoreless through the opening 20 minutes before Reilly Smith gave Vegas the early lead in the 2nd and Derek Engelland doubled the lead just 3:57 later. William Karlsson pushed the lead to three before Max Pacioretty and Ryan Reaves scored in the 3rd to make it 5-0. Chicago pulled a consolation goal back to :27 to go, but that’s as close as the Blackhawks would get as the lead was too much to overcome that late in the game. Marc-Andre Fleury got the win to improve to 12-6-2 on the year after stopping 28 of 29 shots faced in the winning effort.

The St. Louis Blues will look to snap a three-game losing skid after a 5-2 loss at Buffalo in their last outing. Buffalo opened the scoring just :18 into the game before Troy Brouwer tied the game at one for the Blues just 3:19 later. Buffalo jumped ahead 2-1 with :09 to go in the 2nd period before Alex Piietrangelo tied the game at two 3:52 into the 3rd period. Buffalo would re-take the lead for good just 1:54 later and added a pair of empty net goals in the last minute to secure the win and send St. Louis back empty-handed. Jake Allen took the loss, falling to 5-2-2 on the year after giving up 3 goals on 31 shots faced in the losing effort.

I’ve gone back and forth, as Vegas has had bad luck this season but St. Louis is banged up and dealing with their first three game losing streak of the season. However, St. Louis usually plays better at home, and while Vegas has been alright on the road, the Golden Knights have struggled in the underdog role away from home. St. Louis has gotten the upper hand against Vegas in recent meetings, so in a coin-flip type game, I’ll side with the Blues on home ice in this one.