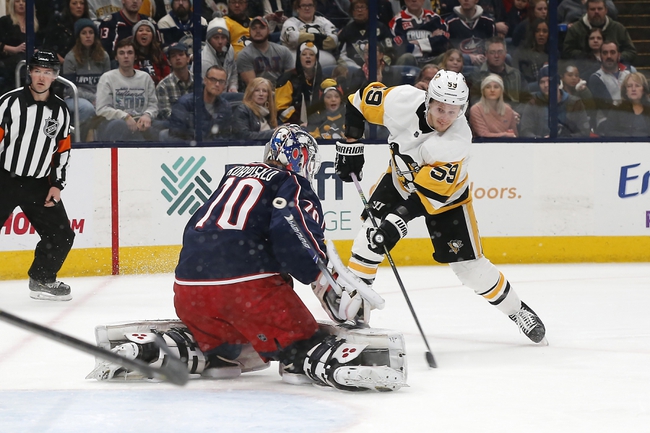 Where to Watch: ATT-Pitt, FS-Ohio Stream live sports and exclusive originals on ESPN+. Sign up now!

The Columbus Blue Jackets and the Pittsburgh Penguins meet in NHL action from PPG Paints Arena on Thursday night.

The Columbus Blue Jackets will look to build on a huge 5-2 win over Washington in their last outing. Cam Atkinson opened the scoring for Columbus just 3:27 into the game and Ryan Murray doubled the lead with the lone goal of the 2nd period. Washington pulled one back:40 into the 3rd before Riley Nash and Oliver Bjorkstrand scored 3:44 apart to go ahead 4-1. Nicklas Backstrom scored with 2:06 to go to make things interesting at 4-2, but Columbus would ice the win with an empty-netter :18 later from Cam Atkinson. Joonas Korpisalo got the win to improve to 12-10-1 after stopping 37 of 39 shots faced in the winning effort.

The Pittsburgh Penguins will look to rebound after a 4-1 loss to Pittsburgh last time out. Jake Guentzel opened the scoring just 2:59 into the game for the Pens, but that was all the luck Pittsburgh would have as Montreal pulled ahead 2-1 in the 2nd with a pair of goals 3:53 apart and added a 3rd with :15 to go in the 2nd. Pittsburgh outshot 13-4 in the 3rd but couldn’t pull a goal back as Montreal added an empty-netter to ice the win late in the 3rd. Tristan Jarry had his shutout streak broken and took the loss, falling to 7-5-0 on the year after giving up 3 goals on 25 shots faced in the losing effort.

Columbus just knocked off the Capitals which was a solid win, but the problem is that Columbus hasn’t been good on the road for much of the season. Pittsburgh fell flat against the Canadiens, but they’ve been a strong team at home for much of the year and have owned the Blue Jackets on home ice, winning 21 of the last 26 in Pittsburgh, including the last three by a combined score of 14-3. I like Pittsburgh to win this one by a couple, so I’ll back the Penguins on the puck line here.