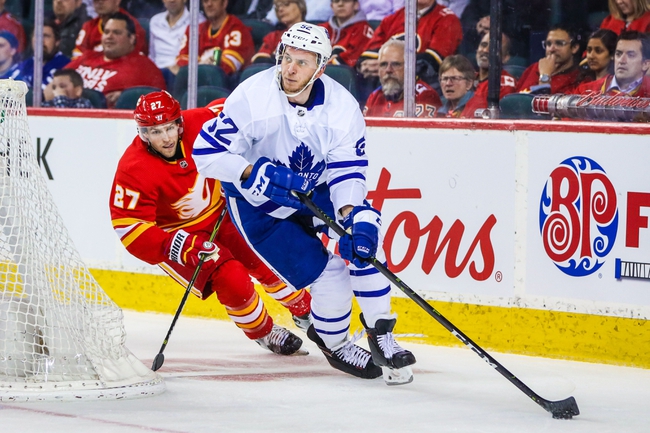 Where to Watch: SN-West, TSN4 Stream live sports and exclusive originals on ESPN+. Sign up now!

The Toronto Maple Leafs and the Calgary Flames meet in NHL action from the Scotiabank Saddledome on Thursday night.

The Toronto Maple Leafs come into this one looking to build on back-to-back wins after a 4-1 win over Vancouver in their last outing. The game was scoreless through the opening 20 minutes before Auston Matthews opened the scoring 1:45 into the 2nd. The Leafs would double their lead thanks to John Tavares with :20 to go in the 2nd period. Vancouver pulled one back just after the midway point of the 3rd period but Tavares would respond with his 2nd goal of the game with just over five minutes to go to restore the two-goal lead. Zach Hyman added an empty-netter to push the lead to 4-1 to secure the win for the Leafs. Frederik Andersen got the win to improve to 15-7-3 on the year after stopping 38 of 39 shots faced in the winning effort.

The Calgary Flames will look to add to their current six-game winning streak after a 5-2 win over Arizona in their last outing. Michael Frolik and Johnny Gaudreau scored 1:52 apart to stak Calgary a 2-0 lead 4:03 into the game before Zac Rinaldo and Sean Monahan pushed the lead to 4-0 in the second period. Arizona would respond by the end of the 2nd but Milan Lucic would make it 5-1 with just over five minutes to go. Arizona pulled one back late, but the lead was too much by then as the Flames held on for another win. Cam Talbot got the win to improve to 3-5-0 on the year after stopping 46 of 48 shots faced in the winning effort.

We all know that the talent is there for Toronto, and we saw it on full display as the Leafs exorcised some demons against Vancouver last time out. However, this line makes no sense to me. Calgary’s red hot, winning six straight, and the Flames have played their best at home all season long. Toronto is always capable of a strong performance, but they’ve had their issues in Calgary over the years. I won’t be going anywhere near this game, but given Calgary’s recent form and their form at home all year, I’ll side with the Flames to extend their winning streak here.