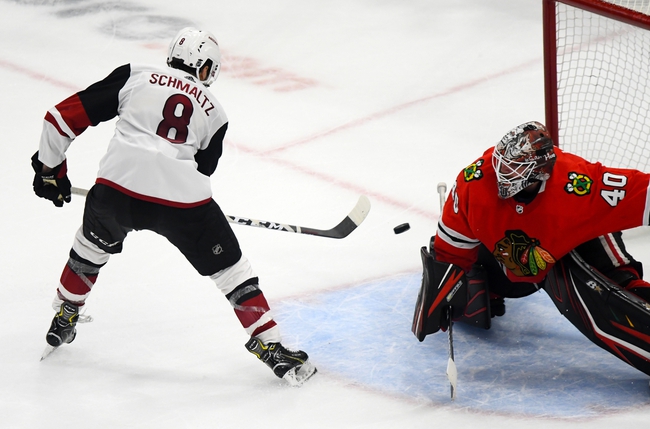 The Chicago Blackhawks and the Arizona Coyotes meet in NHL action from the Gila River Arena on Thursday night.

The Chicago Blackhawks will look to rebound from back-to-back losses after a 5-1 loss to Vegas in their last outing. The game was scoreless through the opening period before Vegas poured in three goals in the 2nd and made it 5-0 with seven minutes to go in the 3rd. Dominik Kubalik added a consolation goal with :27 to go, but that’s as good as it got as the Golden Knights held on for the victory and sent Chicago back empty-handed. Corey Crawford took the loss, falling to 6-8-2 on the year after giving up all 5 goals on 37 shots faced in the losing effort.

The Arizona Coyotes will look to bounce back from a 5-2 loss to Calgary in their last outing. Calgary jumped out to an early 2-0 lead with a pair of goals 1:52 apart before going 4-0 up late in the 2nd period. Jakob Chychrun oulled one back for Arizona in the dying seconds of the middle period before Calgary restored the four-goal lead later in the 3rd. Phil Kessel scored a consolation marker with :32 to play but it was too little too late as the Flames extended their winning streak. Antti Raanta got the loss, falling to 5-5-2 after giving up all 5 goals on 29 shots faced in the losing effort.

I get why the plus money is tempting as Chicago’s had a lot of success in Arizona, and it’s hard to beat the same team within the span of a week. However, I don’t read too much into the head-to-head trends as a lot of those games came when Arizona wasn’t as good of a team as they are now, and teams are bound to have an off night here and there. Arizona has been consistently one of the better defensive teams in the league so far this season, and I’m just not getting enough plus money to think that Chicago would change that here. I’ll lay the juice with Arizona here.