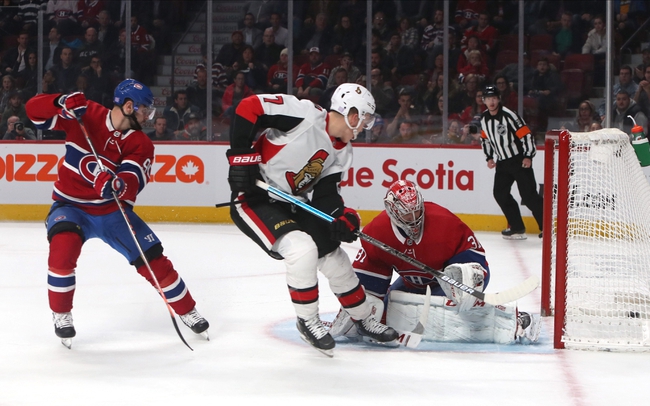 Where to watch: Sportsnet, RDS Stream live sports and exclusive originals on ESPN+. Sign up now!

The Ottawa Senators and the Montreal Canadiens meet in an Atlantic division matchup in NHL action from the Bell Centre on Wednesday night.

The Ottawa Senators will look to build on a 5-2 win over Boston in their last outing. Artem Anisimov opened the scoring just 1:35 into the game before Anthony Duclair doubled the lead with just over four minutes to go in the opening frame. Boston pulled a goal back just over two minutes later, but Chris Tierney would restore the two goal cushion with the lone goal of the 2nd period. The 3-1 score would hold for most of the 3rd before Jean-Gabriel Pageau scored an empty-netter with less than three minutes to play. Boston pulled on back just :43 later but Anthony Duclair would finish things with an empty-netter of his own with :01 to go to pour some salt in the wound. Anders Nilsson got the win to improve to 8-8-1 on the year after stopping 38 of 40 shots faced in the winning effort.

The Montreal Canadiens will look to sweep their back-to-back after a 4-1 win over Pittsburgh last time out. Pittsburgh opened the scoring just 2:59 into the game and would hold that lead into the 2nd where Tomas Tatar would tie the game at one on the power play. Joel Armia gave Montreal the lead just 3:53 later and Shea Weber made it 3-1 with :15 to go in the 2nd. The Pens would outshoot Montreal 13-4 in the 3rd, but they wouldn’t get any closer as Montreal added an empty-netter thanks to Brendan Gallagher with 1:39 to play. Carey Price got the win to improve to 13-9-3 on the year after stopping 33 of 34 shots faced in the winning effort.

I get Montreal being favored here as the Habs looked really good against Pittsburgh and Ottawa’s been a profitable fade on the road and in this matchup. However, that doesn’t change the fact that the Canadiens are on a back-to-back and haven’t had much luck on no rest, losing 8 of their last 10 games in that spot. Montreal also had to travel home for this game while Ottawa got to rest. It would be a bit different if Montreal played both games at home, but with the rest advantage, I think Ottawa can build some momentum after the win over Boston with another win here at plus money.