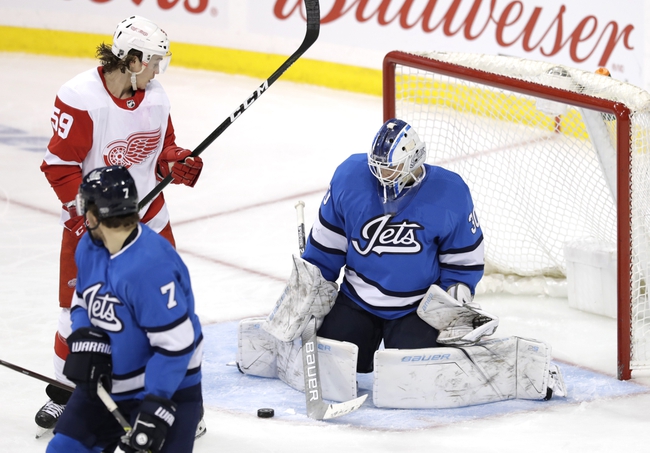 Where to watch: TSN3, FS-Detroit Stream live sports and exclusive originals on ESPN+. Sign up now!

The Detroit Red Wings and the Winnipeg Jets meet in NHL action from the Bell MTS Place on Tuesday night.

The Detroit Red Wings come into this one looking to snap a brutal 11-game losing streak after a 5-3 loss to Pittsburgh last time out. Pittsburgh jumped out to a 2-0 lead after 20 minutes of play before Robby Fabbri got the Wings on the board just over six minutes into the 2nd period. Pittsburgh restored the two-goal cushion just after the midway point of the period and made it 4-1 just 1:38 into the 3rd. Filip Hronek made it 4-2 and Dylan Larkin cut the lead to 4-3 with just 3:07 to play, but that’s as close as Detroit got as Pittsburgh iced the game with an empty-netter with :09 to go. Jonathan Bernier took the loss, falling to 5-9-2 on the year after giving up 4 goals on 23 shots faced in the losing effort.

The Winnipeg Jets will look to build on a 3-2 win over the Anaheim Ducks in their last outing. Mark Scheifele opened the scoring for the Jets just over nine minutes into the game before Anaheim tied things up at one just :32 later. Adam Lowry gave the Jets a 2-1 lead with the lone goal of the 2nd period before the Ducks tied things up again just over eight minutes into the 3rd. The game was so tight we looked like we were headed for OT before Mark Scheifele scored his 2nd of the game to push Winnipeg ahead for good with just over four minutes to go in the game. Connor Hellebuyck held on for the win to improve to 15-7-2 after stopping 31 of 33 shots faced in the winning effort.

I have to give the Red Wings some credit as they battled hard and made things interesting against Pittsburgh, but in the end it was another loss for the Red Wings. The losing can’t go on forever, but I need to see something from Detroit as I can’t just blindly back the Wings and hope that it comes in. Each of Detroit’s last seven losses have come by at least two goals, and given that the Jets have played well at home, I have to give the edge to Winnipeg and to cut the price down, I’m going to back the Jets on the puck line.