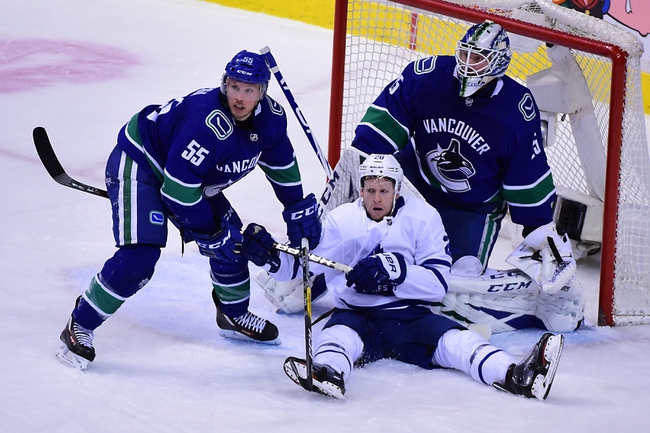 Where to Watch: SN-Ontario, SN-Pacific Stream live sports and exclusive originals on ESPN+. Sign up now!

The Toronto Maple Leafs and the Vancouver Canucks meet in NHL action from the Rogers Arena on Tuesday night.

The Toronto Maple Leafs will look to build on a 5-2 win over St. Louis in their last outing. Zach Hyman opened the scoring for the Leafs just 2:50 into the game before St. Louis tied the game just 1:35 later. Auston Matthews, Hyman (again) and Jason Spezza all scored in a span of 6:06 to give Toronto a 4-1 lead after 20 minutes of play. Matthews would score his 2nd of the game on the power play to make it 5-1 heading into the 2nd intermission. St. Louis pulled one back to make it 5-2, but that’s as close as the Blues would get as Toronto held on for the win. Frederik Andersen got the win to improve to 14-7-3 on the year after stopping 26 of 28 shots faced in the losing effort.

The Vancouver Canucks will look to build on back-to-back wins after a 6-5 overtime win over Buffalo last time out. Josh Leivo gave Vancouver the lead with the lone goal of the opening period before Antoine Roussel doubled the lead early in the 2nd period. Buffalo would tie the game at two with a pair of goals 1:04 apart before Leivo gave Vancouver the lead again with his 2nd goal of the game. The Sabres would once again tie the game just 2:05 later before Vancouver stormed ahead 5-3 just after the midway point of the 3rd with goals from Tyler Myers and the aforementioned Roussel who potted his 2nd of the game. Buffalo would make it 5-4 just 1:25 later and would tie the game at five with less than a minute to go, sending us to OT where J.T. Miller scored on the power play to give Vancouver the win. Thatcher Demko got the win to improve to 7-4-1 after allowing 5 goals on 28 shots faced in the winning effort.

We all know that the talent is there, and some nights it will all come together perfectly as it did for the Buds against the Blues. However, the coming together isn’t always consistent, and the talent level tends to inflate the price and maybe push the line in the wrong direction. Toronto has had serious issues winning games in Vancouver over the years, and the Canucks are no slouch and play much better at home than on the road. I wouldn’t be surprised if Toronto put forth another solid showing here, but there’s too much value to pass on with Vancouver here.