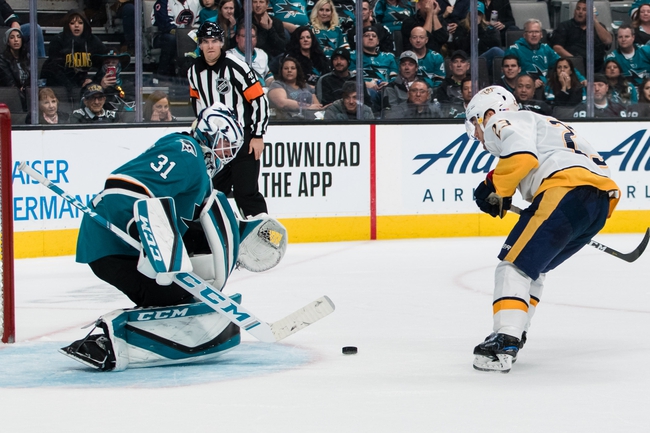 Where to watch: FS-Tennessee, NBCS-California Stream live sports and exclusive originals on ESPN+. Sign up now!

The San Jose Sharks and the Nashville Predators meet in NHL action from the Bridgestone Arena on Tuesday night.

The San Jose Sharks will be out to snap a 4-game losing streak after a 5-1 loss to the Florida Panthers in their last outing. Florida jumped out to an early 2-0 lead before Kevin Labanc pulled a goal back on the power play just after the midway point of the opening period. San Jose didn’t know it at the time, but that’s as close as they would get as Florida restored the two-goal lead with the lone goal of the 2nd period and 4-2 up just after the midway point of the 3rd period. Florida would ice the win with an empty-netter with 1:29 to go in the game. Martin Jones took the loss, falling to 12-11-1 on the year after giving up 4 goals on 32 shots faced in defeat.

The Nashville Predators come into this one looking to build on a 6-4 win over the New Jersey Devils in their last outing. Daniel Carr opened the scoring just :46 into the game before Dante Fabbro doubled Nashville’s lead just 1:27 later. New Jersey would pull one back just :32 later, and before you knew it, less than four minutes into the game we were tied up at two goals apiece. Yakov Trenin and Filip Forsberg restored the two-goal cushion with a pair of goals 1:32 apart early in the 2nd, but the Devils would pull one back by the end of the 2nd period. Nick Bonino restored the two-goal lead again early in the 3rd but the Devils would cut it to 5-4 just after the midway point of the 3rd period. Rocco Grimaldi responded just 1:15 after that to give us the 6-4 score that the Preds would ride to the finish line for the win. Pekka Rinne got the win to improve to 10-4-3 on the year after stopping 29 of 33 shots faced in the winning effort.

I get why the plus money could be tempting as the Predators haven’t been anything special lately, especially at home. However, the Predators still have a lot of pop offensively, and San Jose just has been beaten up during this four game slide, losing by a combined 20-6 in those four game, including 12-1 in the two games of their back-to-back Florida road trip. Martin Jones has also allowed 13 goals in losing his last three starts while Aaron Dell’s lone start against Nashville was a 7-1 loss. I just don’t see how San Jose turns things around here, so I’ll side with Nashville on the puck line here.