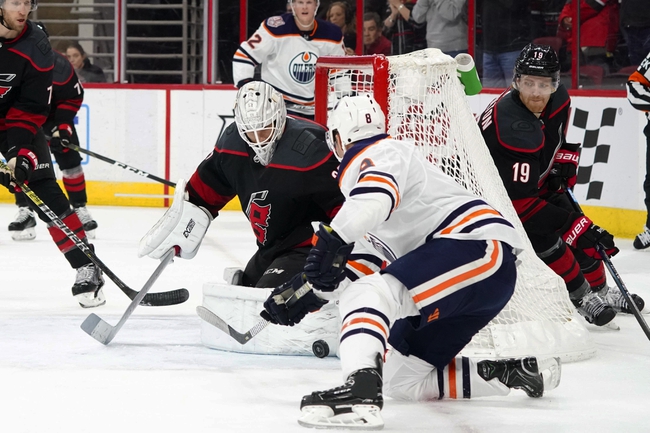 Where to watch: SN-West, FS-Carolina Stream live sports and exclusive originals on ESPN+. Sign up now!

The Carolina Hurricanes and the Edmonton Oilers meet in NHL action from Rogers Place on Tuesday night.

The Carolina Hurricanes come into this game looking to build on back-to-back wins after a 6-2 beatdown of Minnesota in their last outing. Minnesota took the lead just 2:21 into the game before Lucas Wallmark and Andrei Svechnikov scored a pair of goals six minutes apart to go ahead 2-1 after 20 minutes of play. Sebastian Aho made it 3-1 early in the 2nd before Minnesota pulled a goal back midway through the 2nd. That was as close as Minnesota would get though, as Aho added his 2nd of the period to restore the two-goal lead. Joel Edmundsson made it 5-2 before Aho completed his hat trick on an empty net to close things out for Carolina. Petr Mrazek got the win to improve to 13-6-1 on the year after stopping 22 of 24 shots faced in the winning effort.

The Edmonton Oilers will look to bounce back after a 3-2 overtime loss to Buffalo last time out. Buffalo jumped out to an early 2-0 lead after the 1st period before Riley Sheahan and Joakim Bygard scored to tie the game at two after 40 minutes of play. The 3rd solved nothing, so it was off to OT where Buffalo found the game-winning goal just 1:13 into the extra period. Mike Smith ended up with the loss, falling to 7-7-2 after allowing all 3 goals on 22 shots faced in the losing effort.

I get Carolina being favored here as they’re in slightly better form than the Oilers right now. However, Carolina’s won just three of their last ten trips to Edmonton, and the Oilers are still talented as can be with the likes of McDavid and Draisaitl leading the charge. Edmonton is still tied for the 5th-best point total in the league so far this season and getting the Oilers as a home dog is too good to pass on. I’ll side with the Oilers at home here.