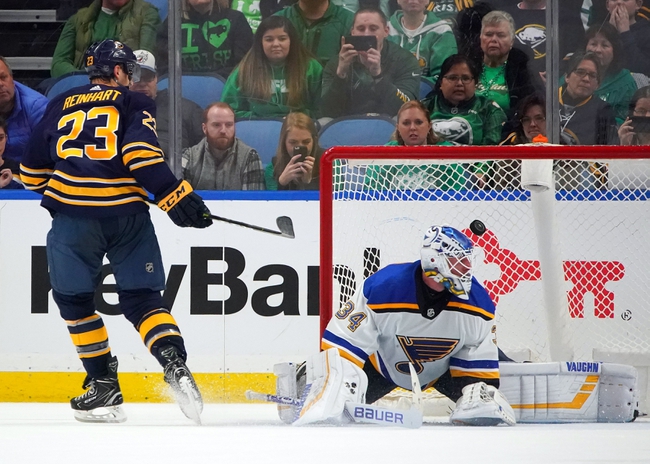 Where to Watch: NBCS, FS-Midwest Stream live sports and exclusive originals on ESPN+. Sign up now!

The St. Louis Blues and the Buffalo Sabres meet in NHL action from the KeyBank Center on Tuesday night.

The St. Louis Blues will look to rebound after a 5-2 loss to the Toronto Maple Leafs in their last outing. Toronto opened the scoring just 2:50 into the game before Ivan Barbashev tied the game at one just 1:35 later. Toronto would respond by striking three times in a span of 6:06 to go ahead 4-1 after 20 minutes of play and 5-1 just before the midway point of the 2nd period. David Perron pulled a goal back just over two minutes into the 3rdperiod, but 5-2 was as close as St. Louis would get as Toronto slammed the door shut the rest of the way for the win. Jordan Binnington took the loss, falling to 13-6-4 after allowing 4 goals on 11 shots faced before being pulled in the 2nd period.

The Buffalo Sabres will look to build on a 3-2 overtime win over Edmonton in their last outing. Kyle Okposo and Johan Larsson staked the Sabres an early 2-0 leads after 20 minutes of play before Edmonton tied the game at two with a pair of goals in the 2nd period. The 3rd period couldn’t decide a winner, so it was off to overtime where Colin Miller found the game-winner just 1:13 into the extra frame. Linus Ullmark got the win to improve to 8-6-2 on the year after stopping 26 of 28 shots faced in the winning effort.

The plus money with Buffalo is tempting considering that they’ve done their best work at home and St. Louis has been touched up in their last couple of outings, but the problem is that the Blues have downright owned the Sabres over the years both overall and in Buffalo. You also have to imagine that the Blues are going to bounce back eventually and the Sabres aren’t in a good spot here. I’ll lay the juice with the Blues on the road in this one.