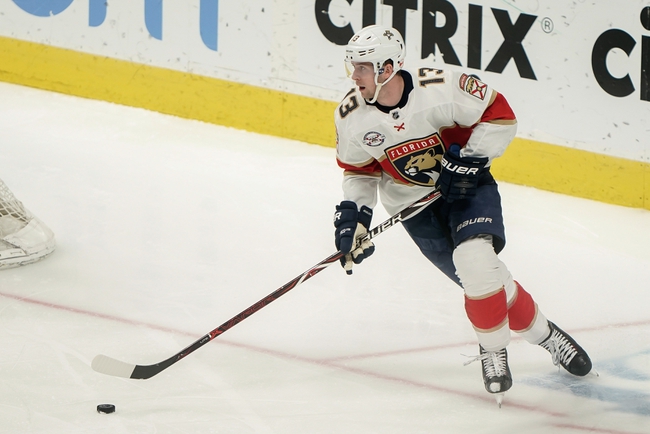 Where to watch: FS-Florida, NBCS-California Stream live sports and exclusive originals on ESPN+. Sign up now!

The San Jose Sharks and the Florida Panthers meet in NHL action from the BB&T Center on Sunday.

The San Jose Sharks will look for a bounce back performance after being throttled by Tampa Bay in their last outing by a final score of 7-1 to push their losing streak to three games. Tampa Bay went up 1-0 just 3:10 into the game before pushing ahead 3-0 by the end of the 2nd period. The Bolts went ahead 5-0 less than four minutes into the 3rd, and that score would hold up before Marc-Edouard Vlasic got the Sharks on the board with just over five minutes to go. Tampa Bay would respond just :52 later and added a 7th for good measure with :25 to go. Martin Jones took the loss, falling to 12-10-1 after giving up 4 goals on 21 shots faced before being pulled in the 3rd period.

The Florida Panthers will look to keep their momentum going after a 4-1 win over Columbus on Saturday. Evgenii Dadonov opened the scoring for Florida just :18 into the game and Josh Brown doubled that advantage just before the midway point of the 2nd period. Brett Connolly made it 3-0 on the power play just over six minutes into the 3rd before Columbus finally god on the board 4:25 later. That was as close as the Blue Jackets would get though as Mike Hoffman added a 4th on an empty net to ice the win for Florida. Sergei Bobrovsky got the win against his former team to improve to 10-6-4 on the year after stopping 33 of 34 shots faced in the winning effort.

This is a bad spot for San Jose as the Sharks have to play on a back-to-back against an equally dangerous Florida team that can put a ton of shots on goal and often enough the shots find the back of the net as Florida is 5th in the NHL averaging 3.44 goals per game this year. That’s compounded by the fact that the Sharks used both of their goaltenders last night as well. On the other hand, I expect Bobrovsky to get the day off here and Florida to turn to their backup, and whether it’s Sam Montembault or Chris Driedger, I expect San Jose to pot a couple of their own here. I’ll side with the over in this spot.