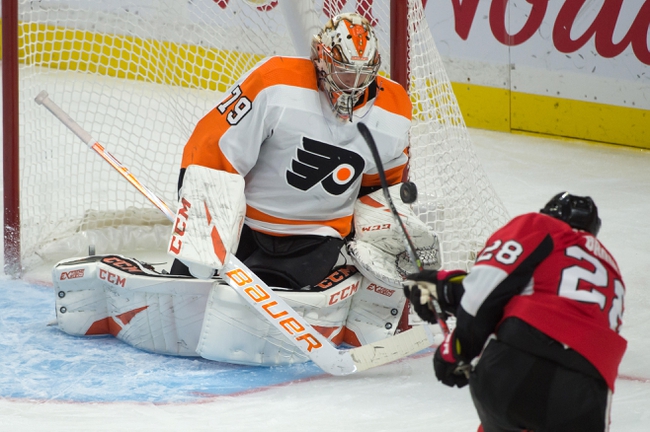 The Ottawa Senators and the Philadelphia Flyers meet in NHL action from the Wells Fargo Center on Saturday afternoon.

The Ottawa Senators will look to build on a 5-2 road win over the Edmonton Oilers in their last outing. Ottawa found themselves in a 1-0 hole after 20 minutes of play before Artem Anisimov scored on the power play and Connor Brown gave the Sens the lead just :12 after that. Tyler Ennis pushed the lead to 3-1 before the Oilers pulled one back late in the 2nd period. Anthony Duclair restored the two goal lead just 1:30 into the 3rd and Vladislav Namestnikov put in a 5th just after the midway point of the final frame and the Senators would ride that one to the finish for the win. Craig Anderson got the win to improve to 5-8-0 on the year after stopping 24 of 26 shots faced in the winning effort.

The Philadelphia Flyers will be out to rebound after a 3-1 loss to the Philadelphia Flyers in their last outing. Arizona scored just 2:25 into the game to take the early lead, and the Coyotes would hold onto that lead through the rest of the 1st, all of the 2nd and a good chunk of the 3rd before doubling their last with just over seven minutes to go. Matt Niskanen pulled one back with less than five minutes to go, but that’s as close as the Flyers got as Arizona iced the win with an empty-net goal to pick up the win and send Philly back with just their second regulation loss at home this year. Carter Hart took the loss, falling to 7-3-2 after allowing a pair of goals on 17 shots faced in the losing effort.

I’d like to give Ottawa a shot with the heavy plus money after how they performed on the road against the Oilers, but the fact is that the Senators are still not a good road team and haven’t been one for a couple of years now. Philadelphia was stifled by a pretty good Arizona team, but I expect them to get back on track at home here and to do so by a couple of goals, so I’ll side with the Flyers on the puck line in this one.