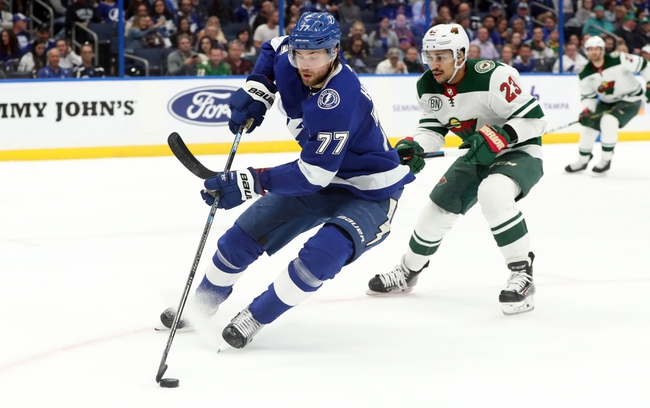 The Minnesota Wild and the Tampa Bay Lightning meet in NHL action from Amalie Arena on Thursday night.

The Minnesota Wild come into this one looking to extend their four game winning streak after a 4-2 win over Florida in their last outing. Florida jumped out to a 2-0 lead with two goals in a span of 4:32 at the midway point of the opening period. The lead would hold until the 2nd where Jason Zucker and Mats Zuccarello scored in a span of 3:30 to tie the game at two heading to the 3rd. Carson Soucy gave Minnesota the lead before Luke Kunin iced the win with an empty-netter with just over a minute to go. Kaapo Kahkonen got the win to improve to 2-0-0 after stopping 44 of 46 shots faced in the winning effort.

The Tampa Bay Lightning will look to build on a 3-2 overtime win over Nashville last time out. Victor Hedman opened the scoring with the lone goal of the opening period before Nashville tied the game early on in the 2nd. Ondrej Palat gave Tampa the lead back just :31 later and the Bolts would ride the lead into the 3rd where Nashville tied the game just before the midway point of the final period. The rest of the 3rd solved nothing, so it was off to overtime where Nikita Kucherov found the winner just past the midway point of the extra frame. Andrei Vasilevskiy got the win to improve to 10-7-1 on the year after stopping 30 of 32 shots faced in the winning effort.

I get the Lightning being favored at home, especially with a couple of head-to-head trends, but a win over an equally struggling Nashville team doesn’t move the needle a whole lot for me, at least not to the point where I want to lay this kind of juice, or even try to puck line. Minnesota hasn’t been stellar on the road this season, but the Wild have won 4 straight games and are averaging 4.25 goals per game during this little hot streak that they’re on. I’ll take a shot at Minnesota and the plus money in this one.