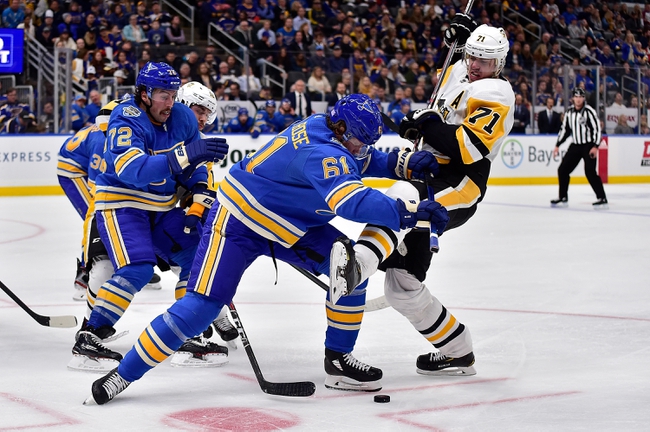 The St. Louis Blues and the Pittsburgh Penguins meet in NHL action from the PPG Paints Arena on Wednesday night.

The St. Louis Blues will look to build on a 4-0 win over Chicago to extend their winning streak to four games. MacKenzie MacEachern opened the scoring for the Blues just 2:34 into the game before Jaden Schwartz doubled the lead later on in the period on the power play. The 2-0 line would hold into the 3rd where Brayden Schenn made it 3-0 just before the nine minute mark of the period and Tyler Bozak pushed the lead to 4-0 with less than two minutes to play. Jake Allen got the win to improve to 5-1-2 on the year after stopping all 38 shots faced in the winning effort for his 1st shutout of the season.

The Pittsburgh Penguins will look to get some revenge after a 5-2 loss to these same St. Louis Blues in their last outing. St. Louis opened the scoring with the lone goal of the opening frame before Sam Lafferty tied the game at one early on in the 2nd period. The Blue re-took the lead with just under six minutes to go in the 2nd and forged ahead 3-1 less than three minutes into the 3rd period. The Blues went ahead 4-1 just 4:15 later, but Kris Letang would cut the deficit back to two with just under seven minutes to go. That was as close as the Pens got though, as St. Louis potted a 5th goal to secure the win. Matt Murray took the loss, falling to 9-5-4 on the year after giving up 5 goals on 27 shots faced in the losing effort.

It’s really hard for me to pick a side here as St. Louis has been so good this season while the Penguins despite their injuries still boast one of the better home records in the NHL. That’s why I’m going to side with the under here. I expect a lower scoring more physical and tight game, not unlike the 4-3 meeting from last week, with just a couple fewer goals. St. Louis usually plays the higher-tier teams to the under while I see Pittsburgh playing a more reserved style of hockey to protect their goaltending which has been rocked lately and is due for a shutdown performance.