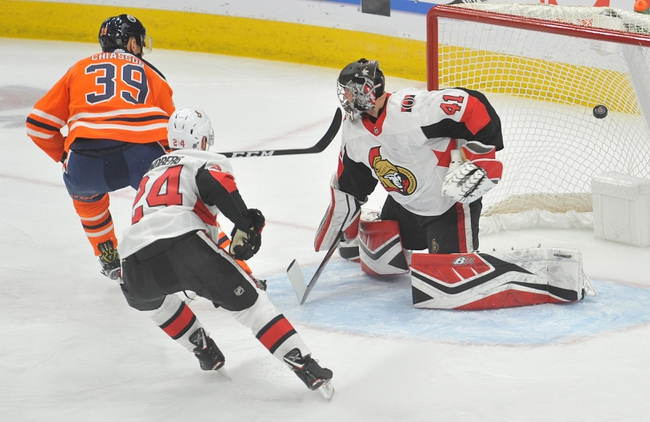 The Ottawa Senators and the Edmonton Oilers meet in NHL action from Rogers Place on Wednesday night.

The Ottawa Senators will be out to snap a five game losing streak after a 5-2 loss to Vancouver last time out. Ottawa fell behind 2-0 within the first 4:28 of the game as the Canucks scored a pair of goals 2:38 apart. Vancouver pushed their lead to 4-0 by the end of the 1st before Ottawa got on the board with just over eight minutes to go in the 2nd period thanks to Jean-Gabriel Pageau. Tyler Ennis made it 4-2 just :40 into the 3rd, but that’s as close as Ottawa got as Vancouver added a 5th goal and rode the three-goal lead to the finish line. Anders Nilsson ended up with the loss, falling to 7-7-1 after being pulled in the 1st period, giving up 4 goals on 15 shots.

The Edmonton Oilers will look to build on a 3-2 win over the same Vancouver Canucks in their last outing. Josh Archibald opened the scoring opened the scoring for the Oilers just over nine minutes into the game before Vancouver tied the game at one with 4:26 to go in the opening period. Vancouver went ahead 2-1 in the 2nd but the Oilers tied the game just 1:45 later thanks to Leon Draisaitl. Draisaitl broke the deadlock with his 2nd power play goal of the game just :46 into the 3rd and would ride that lead to the finish line as the Oilers held on for the win and the two points that go along with it. Mikko Koskinen got the win to improve to 10-2-2 on the year after stopping 30 of 32 shots faced in the victory.

If things weren’t bad enough for Ottawa losing five straight, the Sens have to play on the road, on a back-to-back where both goalies had to play on Tuesday, against an Edmonton team that’s been one of the best in the league for most of the season. I simply don’t know how Ottawa keeps up here, so I’ll side with the Oilers on the puck line to bring down the price as I think this one isn’t even close.