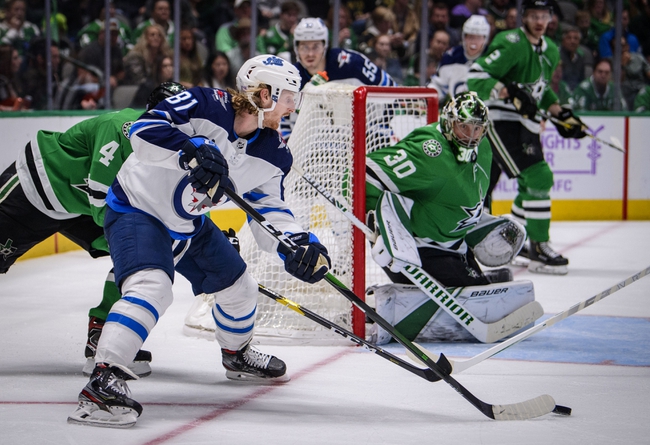 Where to watch: TSN3, FS-Southwest Stream live sports and exclusive originals on ESPN+. Sign up now!

The Dallas Stars and the Winnipeg Jets meet in a Central division clash in NHL action from the Bell MTS Place on Tuesday night.

The Dallas Stars will be out to snap a three game losing skid after a 3-2 loss to Minnesota in their last outing. The game was scoreless through the opening 20 minutes before Minnesota got on the board first with just over seven minutes to go in the 2nd. The lead lasted all of 2:45 before John Klingberg tied the game at one on the power play. The 1-1 score held going into the 3rd when Blake Comeau gave Dallas a 2-1 lead with just under six minutes to play, but the Stars couldn’t hole on as the Wild tied the game with 2:30 to go in the 3rd. The rest of the 3rd and overtime solved nothing, so it was off to a shootout where both teams scored their first two attempts and missed the 3rd before Minnesota found the winning goal in round 4. Ben Bishop took the loss, falling to 9-6-2 on the year after giving up a pair of goals on 29 shots faced in the losing effort.

The Winnipeg Jets will look to bounce back from a 2-1 defeat at the hands of the Los Angeles Kings in their last outing. The Kings jumped out to a 2-0 first period lead with a pair of goals in a span of 4:38. Los Angeles would carry that lead through the rest of the first and all of the 2nd before Jack Roslovic pulled one back for Winnipeg. However, despite outshooting the Kings in the 3rd by a count of 13-7, the Jets wouldn’t find an equalizer as the Kings held on for the win. Laurent Brossoit took the loss, falling to 3-3-0 after giving up both goals on 34 shots faced in the losing effort.

Dallas has been very kind to us lately when they were on their hot stretch, but the Stars have taken a step back in losing their last three games. Winnipeg may not have as strong of a record at home than they do on the road and just gave up 5 goals to the Stars a couple of weeks ago, but the Jets have owned this matchup for the most part, especially on home ice. Winnipeg’s also allowed just three goals combined in their last three games, so I expect the Jets to buckle down here and pick up a win.