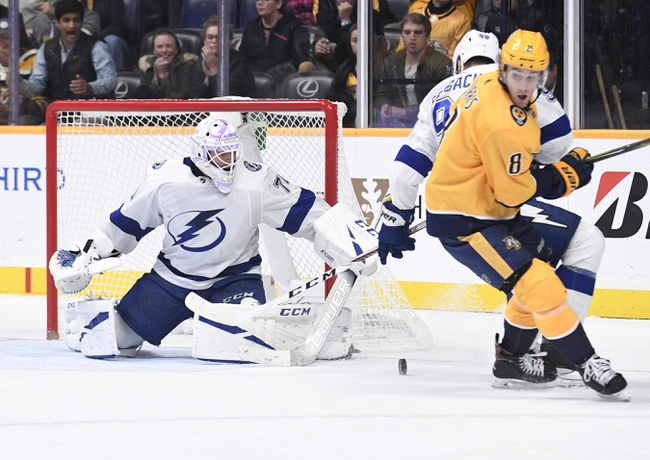 Where to Watch: Sportsnet, NBCS Stream live sports and exclusive originals on ESPN+. Sign up now!

The Tampa Bay Lightning and the Nashville Predators meet in NHL action from the Bridgestone Arena on Tuesday night.

The Tampa Bay Lightning will look to snap a three game losing streak after a 3-2 loss to the Carolina Hurricanes in their last outing. Carolina jumped out to an early 2-0 lead with a pair of goals 2:41 apart before making it 3-0 with :07 left to go in the opening frame. The Hurricanes would hold onto that lead through the 2nd and into the 3rd where Brayden Point pulled one back and Tyler Johnson added a 2nd to make it 3-2 with just over 11 minutes to play. That was as close as the Bolts got though, as Carolina slammed the door shut despite Tampa Bay outshooting Carolina 15-2 in the 3rd period. Curtis McElhinney took the loss, falling to 3-2-2 on the year after giving up 3 goals on 24 shots faced in the losing effort.

The Nashville Predators will also look to rebound after a 3-0 loss to the Nashville Predators in their last outing. The game was scoreless through 20 minutes of play before Florida got on the board first just 1:06 into the 2nd period. The 1-0 lead would hold up until the Panthers struck twice in 2:31 in the 3rd period to forge ahead with a 3-0 lead that the Cats wouldn’t let go of. Filip Forsberg led the Preds with 7 shots on goal while Ryan Ellis had 3 shots on goal in the loss. Juuse Saros took the loss, falling to 3-6-2 on the year after allowing 3 goals on 28 shots faced in the losing effort.

I considered Tampa Bay as the Lightning have a veteran group that aren’t going to be down on themselves with a three game losing streak. However, Nashville has been a thorn in the side of the Lightning for a few years now, and the Predators are still one of the tougher home teams to beat in the NHL despite their recent struggles and I just think that Tampa Bay has issues again here so I’ll side with Nashville and the cheap price at home here.