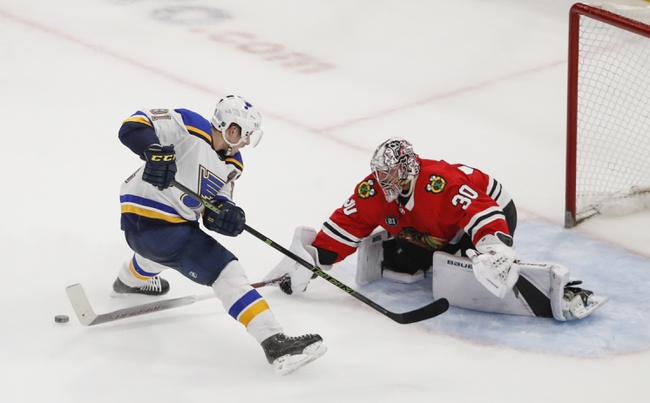 The St. Louis Blues and the Chicago Blackhawks meet in a Central division clash in NHL action from the United Center on Monday night.

The St. Louis Blues will look to build on their third straight win after a 5-2 win over Pittsburgh last time out. Justin Faulk opened the scoring for St. Louis with the lone goal of the opening period but Pittsburgh would tie the game at one early on in the 2nd period. Nathan Walker would give St. Louis the lead back with just under six minutes to go in the 2nd and the Blues would carry the 2-1 lead into the final frame. Ivan Barbashev and MacKenzie MacEachern scored 4:15 apart to push St. Louis ahead 4-1, before Pittsburgh pulled a goal back with just under seven minutes to play. 4-2 was as close as the Penguins got as Jaden Schwartz added a power play marker with less than three minutes to go. Jordan Binnington got the win to improve to 13-4-4 on the year after stopping 29 of 31 shots faced in the winning effort.

The Chicago Blackhawks will look to rebound after back-to-back losses to Colorado, including a 7-3 loss in their last outing. Brandon Saad opened the scoring for Chicago just 1:37 into the game short-handed, but Colorado would turn things around, going from 1-0 down to ahead 3-1 with three goals in a span of 3:15. Colorado carried the lead into the 2nd, where the Avs went 5-1 up with two goals in 2:58 and 7-1 ahead with another pair 2:10 apart around the midway point of the 2nd period. Dominik Kubalik pulled a goal back :36 later and the score would hold at 7-2 until Patrick Kane added a consolation goal with just over five minutes to go. Robin Lehner took the loss, falling to 5-5-3 after allowing 5 goals on 14 shots faced in the losing effort.

Chicago as a home dog is tempting, but these two teams are just heading in different directions right now, with the Blues winning three straight and getting points in six of seven while Chicago’s dropped 5 of their last 6 games. I just think that we’re not getting enough plus money to consider a flyer on the Blackhawks here given St. Louis’ outstanding road form this season, so I’ll side with St. Louis in regulation to get a more favorable price on the Blues here.