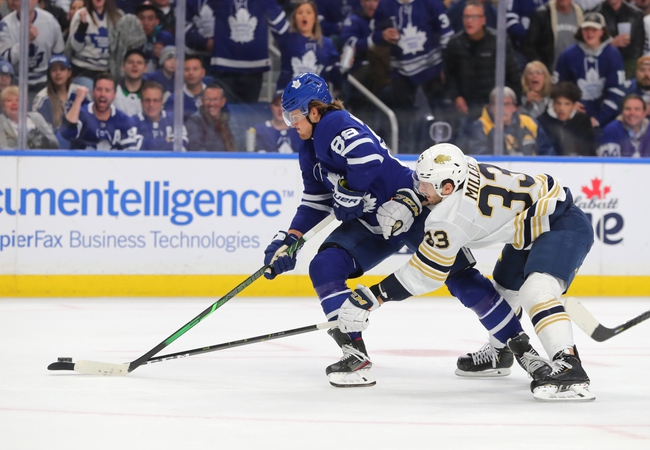 The Buffalo Sabres and the Toronto Maple Leafs meet in an Atlantic division matchup in NHL action from Scotiabank Arena on Saturday night.

The Buffalo Sabres come into this one looking to sweep the Maple Leafs in the home and home set after logging a 6-4 win on Friday in Buffalo. John Tavares opened the scoring with the lone goal of the opening period with 1:06 to go in the 1st while Tavares doubled his tally early in the 2nd. Jeff Skinner and Jack Eichel scored 3:58 apart to tie the game at two before Casey Mittelstadt gave Buffalo a 3-2 lead just 2:25 after that. Viktor Olofsson made is 4-2 with just over a minute to go in the 2nd period, giving Toronto a long climb back.

Dmytro Timashov pulled one back for Toronto less than seven minutes into the 3rd, but Jimmy Vesey would respond for Buffalo just 1:44 after that. Kasperi Kapanen cut Toronti’s deficit back to one, but that’s as close as Toronto would get as Jack Eichel iced the victory with an empty-net goal with :27 to go.

It’s hard to beat the same time in as many nights, especially when you have to go on the road for the second leg, and Buffalo’s issues on the road have been well documented. Toronto is usually a better team at home, and Frederik Andersen has won each of his last three starts and Toronto has won his last three starts against Buffalo dating back to last season. I just think Toronto responds in a huge way here, so I’ll side with Toronto on the puck line here.