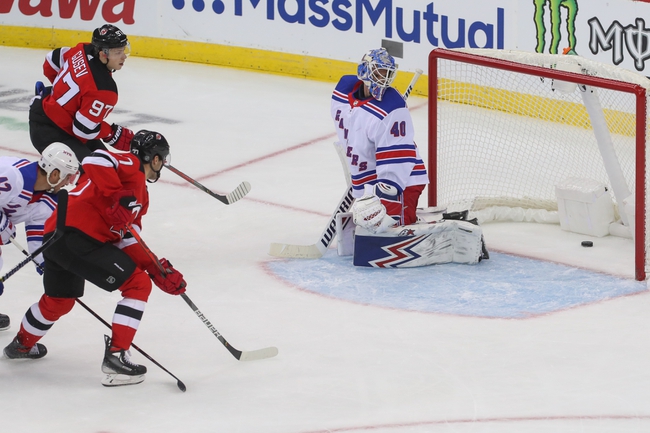 The New York Rangers and the New Jersey Devils meet in NHL action from the Prudential Center on Saturday afternoon.

The New York Rangers will look to bounce back after a tough 3-2 overtime loss to Boston in their last outing. Pavel Buchnevich opened the scoring for New York with the lone goal of the opening period before Filip Chytil doubled the lead early on in the 2nd. Boston pulled one back late in the 2nd and tied the game early in the 3rd, with the rest of the final 20 minutes failing to produce a winner. Next came OT where Boston broke the Rangers’ hearts, finding the OT winner just 1:40 into OT. Henrik Lundqvist took the loss, falling to 7-5-2 on the year after allowing 3 goals on 27 shots faced in the loss.

The New Jersey Devils were one of the lucky few to have Friday off, and it was needed after a 6-4 win over Montreal on Thursday. Blake Coleman opened the scoring for New Jersey, but the lead lasted all of :22 before Montreal tied the game at one. That tie lasted just :36 before Travis Zajac put New Jersey back on top. The two sides traded goals in the 2nd with Montreal tying the game and Miles Wood giving New Jersey the lead again just 1:36 later. Montreal tied it again and Jesper Boqvist responded again just 2:26 later. Dan Severson finally gave Jersey some breathing room but once again, Montreal responded just :16 later. The 5-4 score line would hold up for most of the 3rd before Coleman added his 2nd goal of the game on an empty net to seal the deal. MacKenzie Blackwood got the win to improve to 8-6-3 on the year after giving up 4 goals on 48 shots faced in the win.

I honestly think this game could go either way, with New Jersey catching New York on a back-to-back, but the Rangers have been playing great hockey in their own right. Instead of trying to pick a side, I’m going to go with a reoccurring trend and side with the over. The over’s been pretty much money between these two teams in New Jersey for a couple of years now, and Blackwood’s given up 13 goals in his last three starts, while Georgiev has allowed five goals in back-to-back starts and gave up four in a loss to the Devils earlier this season. I just think this game easily hits 7 or 8 goals, so I’ll back the over here.